Some time ago I went to Germany and one night I went to a “Kiosk” – a small shop which offers cigarettes, sweets, drinks and alcohol. I wondered what kind of Cognac I may  find here, in the middle of the night; in some middle sized German town.

(I had a brief look at the German brandy market; you find all German brands in a list below)

What I directly found: German Weinbrand bottles Mariacron and Royal. They are no longer allowed to call themselves Cognac. The one missing here would be Asbach and Chantré – which somehow sounds very French.

Most of the time, German brandies are distilled from imported wine (for example the Israelis do it as well). The most respected producer in Germany would be Asbach (Asbach Uralt). The founder of Asbach used the word “Weinbrand” for the first time in 1898,  after 1919 (contract of Versailles) the wording “Cognac” wasn’t allowed any more in Germany.

Asbach Uralt isblended from 25 different wine distillations, aged for about 3 years in, yes.. limousin oak casks. It’s said to be fruitier than a Cognac, the grapes come through – with an ABV of  38%. The Uralt is produced in Rudesheim.

The most known German brandy is Mariacron, owned by drinks company Eckes. The Royal Weinbrand is

Of course I found two of the top Cognacs on the shelf: A Hennessy VSOP and a Rémy Martin VSOP, between a Macallan whisky and a Chivas Regal… note the card decks, right between champagne and Marlboro cigarettes.

Most of the German brandy (Weinbrände) are made from half-fortified wines and usually imported.

The category for aged brandy is the same: VSOP, XO

And here ist the Goethe VSOP – this was really totally new to me. 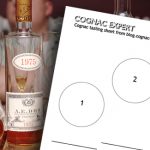