Finally, one global pandemic later, we are thrilled to launch our Sophie & Max Sélection N° 3 Limited Edition Cognac. After Sélection N° 1 XO, a collaboration with André Petit & Fils, and Sélection N° 2 EXTRA, a blend created by Cognac Birius, this third limited edition in our line of exclusive partnerships with artisanal producers is a Réserve by Cognac Bertrand. 250 bottles, that’s all there is of this unique blend.

Sophie & Max Sélection N° 3 Réserve was developed in close exchange with Seph Hall and Thérèse Bertrand, who have been running the Bertrand brand since moving back to Thérèse’s family estate back in 2010. In fact, it was at last year’s Thanksgiving dinner, which Thérèse and Seph hosted, when we suddenly thought Seph should blend the next Cognac in our Sélection series. It was the way he spoke about his craft but also about other topics ranging from international politics to sustainable energies, that got us excited to take this leap.

The Bertrand family has been cultivating vineyards in Reaux since 1731. They’ve been farming there all along, growing wheat and producing flour in a windmill that is one of the few still remaining in the region. Thérèse Bertrand is the daughter of Jean François Bertrand and Ana Valero Cobos, who is from Pozoblanco in the Spanish region of Cordoba. She and her family came to the Bertrand estate to harvest grapes. That is how Thérèse’s parents met and fell in love – so romantic.

To me, Cognac Bertrand is the most international of Cognac houses, one that unites a multitude of cultural influences at its core, which can be rare in this very rural part of France.

Seph is the only American master blender in Cognac. And not only that: he was born and raised in Tennessee, right next to Bourbon country, which gives it yet another spin. As a young man, Seph studied Physics then worked as a chef in Colorado, he always had a fascination with gastronomy. Later on, Seph worked as a science teacher in Costa Rica when he met Thérèse, who was a teacher at the same school and was touring as–this is too good to be true–a singer songwriter! Prior to this encounter, Thérèse had studied modern languages and economics in the UK and worked in “every job you could imagine” across Europe.

After enjoying traveling and working abroad, Thérèse and Seph decided it was time to move to Cognac and run part of the family business. Seph learned the trade from scratch, he’s incredibly dedicated to the craft of making Cognac. Samuel, Thérèse’s brother, is in charge of agriculture and distillation. Since then, the couple has built a beautiful range of Cognacs that reflects the heritage of the house as well as integrates their contemporary taste.

Max and I went to visit Seph and Thérèse after inviting them to develop Sophie & Max Sélection N° 3. Seph had prepared 6 samples to determine our future blend. He had selected two lots and made different micro-blends of different proportions. This was definitely the scientist talking!

We tasted them all, and after much discussion decided that the Sample 2, half Lot A and half Lot B was the most interesting and promising combination. Of course, you can never know for sure, since the alcohol volume was still pretty high and therefore needed to be reduced, and the blend hasn’t rested for very long, but Seph was excited to take a risk. We were thrilled. And guess what? The risk paid off! The Cognac is absolutely incredible, smooth and peppery at the same time, so sophisticated and mature, but with a light, modern twist.

Some background on Lot A and Lot B

This is where it gets interesting. On his Sélection N° 3 quest, Seph identified two barrels in the cellars that he wanted to use. Lot A was a very old blend of eaux-de-vie which has been resting in Bertrand’s cellar for way over two decades. Now the other one, Lot B, is the mystery barrel. Not often mentioned, but completely normal at every Cognac house, are “consolidation barrels”. When barrels have little or hardly any eau-de-vie left in them, they are not being used to their highest capacity and need to be vacated so to speak.

What usually happens is that there will be one barrel where these small quantities of eaux-de-vie are consolidated, or combined. What you get is a blend of different age qualities that sits in a barrel until it is used as a base for a new Cognac assemblage. In comparison to Lot A, this blend was darker in character and had more spice and wood, suggesting a very mature Cognac impacted by the extended time in the barrel, and all of the years of consolidation. Also the abv. of Lot B was higher, ~53%. Seph says this lot was in fact of similar age to Lot A but of course it’s difficult to specify the years.

What does Réserve mean?

Once the future blend was stored away in an oak barrel to “marry” for a few months, we started thinking about the age designation and of course the design of the label. The Cognac’s age designation needs to convey that it is a very mature blend. XO or even XXO would not have appropriately communicated the age. We ended up choosing the designation Réserve to describe this mature blend, because it was actually used on one of Bertrand’s Cognacs from the generation of Thérèse’s grandparents.

As for both other limited editions of Sélection, my husband Brian designed the labels. He used a beautiful 100% recycled paper combined with gold and a dark elegant green to create an updated version of the old bottle.

Following Sophie & Max Sélection N° 2, we wanted to create a Cognac that was equally old but totally different in taste and style. Thanks to Seph’s incredible talent, we succeeded.

Color – The eye is greeted by a Cognac that is brightly toned, with shades of amber and a polished copper color.

Nose – The nose is greeted at first to flowers and fruit. But then comes the deep underlying baking spice notes and clear traces of vanilla. Followed by notes of almond, marzipan, and a surprising dash of citrus. A complex balance of fruit and spice. A seemingly dark Cognac with a bright spirit.

Palate – The initial attack is all on the warming baking spices, which then gives way to reveal a fruit character: orange peel and various candied fruits. Rose petals and other floral notes persist from entry through to the finish. And surprisingly, the finish is lifted by the gentle touch of citrus. Complex.

Sophie & Max Sélection N° 3 marks the perfect continuation of our Sophie & Max Sélection limited edition series. Our passion is to work in close collaboration with small Cognac houses and producers that inspire our imagination. It’s absolutely possible to find people who like doing things a little differently in the seemingly regulated world of Cognac-making. Seph and Thérèse have an enchanting way of operating within this rural setting, brightening it up with their worldly sophistication, open-minded spirit, and humor. It never gets boring “chez les Bertrands.” We love that.

Special offer: The first 50 customers to purchase a bottle of Sophie & Max Sélection N°3 Réserve by Cognac Bertrand will gain entry to an exclusive fireside chat with Sophie, Max, Seph and Thérèse. During this unique online gathering, you’ll of course learn about the Cognac Bertrand house, Seph and Thérèse’s story, and the Sélection N°3 Réserve Cognac, but you’ll also be able to share your questions with Sophie, Max, Thérèse, and Seph on anything and everything Cognac-related. It’s a wonderful opportunity and promises to be a conversation full of insight, opinions, and reflections. Don’t miss out! 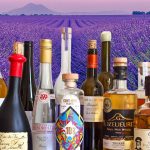 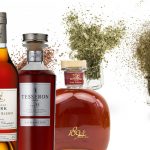 All About Spicy Cognacs (+ 8 tasty ones to try)