Of the SMC, he says that his predecessors have worked extremely hard for both debate and honest exchange in the world of cognac.  This is very important, especially in a union such as the SMC which represents cognac houses of many different sizes.  Very often managers are also owners, and along with the vice president, Patrick Piana, CEO of Remy Martin, they want to focus all their efforts to the SMC. 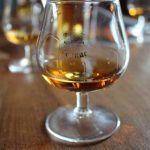