Hennessy and the Arts: Photographic Exhibition of China

The 16th June to 16th October sees Jas Hennessy & Co (LVMH) in Cognac hosting a unique photographic display featuring the work of Marc Riboud.  Housed in the Quai Hennessy, an architectural marvel designed by Jean-Michel Wilmotte, the exhibition of Mr Riboud follows in the footsteps of some of the world’s most famous artistic names that have been showcased in this annual event.

The display is centred round everyday life of the Chinese people from 1957 to the current day.  Of course, Hennessy has a great tradition with China, having had links there for over 150 years.  And with the current economic climate and China continually proving to be one of their fastest growing markets, it seems a very apt subject.

The photographs are sensitive and moving – evoking the myths and legends of the country and its people, and keeping a central theme of mankind and the dreams which drive us.

Bernard Peillon, President of Jas Hennessy & Co, says ‘The moments captured by the unique look of Marc Riboud form unique evidence of changes that China has experienced since the mid twentieth century.  It is this feeling that we wanted to share through the exhibition.’

The exhibition opens on June 16th at 19.30 and runs for a period of two months. 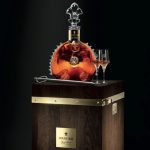