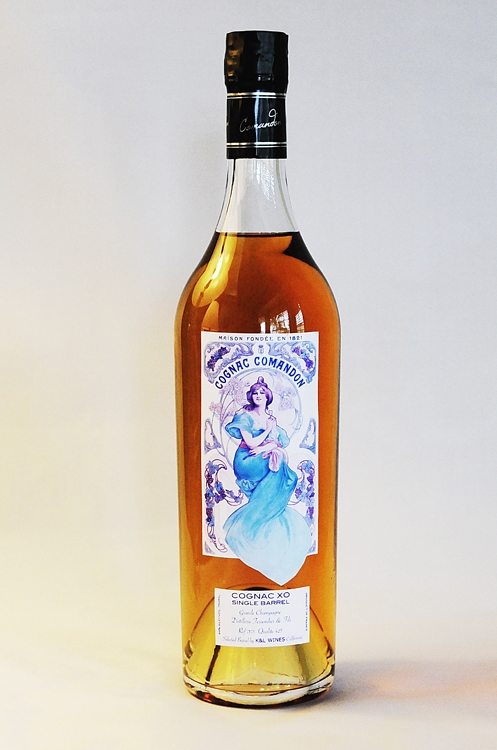 Cognac-Expert.com with an exclusive story: Comandon launches a new product line, the Single Barrel Cognac collection – and we love the vintage labeling.

A Comandon XO Single Barrel Cognac from the Borderies appellation. A single barrel of old cognac left untouched for about 18 years was selected to be bottled at cask strength of 45% alcohol per volume.

One Comandon XO Single Barrel Cognac is from the Petite Champagne appellation. This barrel was selected for its exquisite complexity and typicity to accurately represent the Petite Champagne terroir. Awakened after more than 30 years of slow aging and a cask strength of 41,1% of alcohol per volume.

And the third Comandon XO Single Barrel Cognac is from the Grande Champagne appellation and it is bottled at strength without reduction ending with 44% alcohol per volume. After 40 years of aging in a dark paradis this cognac has reached its full maturity and it now epitomizes the refinement and elegance of Grande Champagne.”

Normally “single barrels” and “cask strength” spirits are of interest to collectors and connoisseurs. Recently we have seen an increasing interest for selected barrels and higher proof spirits. While much of this current trend is attributed to products such as single-malt scotch and small-batch bourbon, and more recently to single barrel tequila, there are a few cognac producers that have ventured into this consumer trend.

In January 2012, Cognac De Luze has created a cognac named single barrel finish which offers a limited number of bottles (approx. 500) produced from a blend which was completed and finished into a single cask and left for about 2 years inside that said ‘single cask’ before being bottled (40% Alc/vol).

“The Forgotten Casks” is another single barrel cognac which was created under the cooperation of Jean-Pierre Cointreau, Henry Preiss and Alain Royer. It has a higher cask strength of 46% Alc/vol, and it is a limited edition cognac made for a sole distributor in the USA.

To a certain extent Cognac Jean Grosperrin offers single barrel cognacs, but it is a cognac house which mostly focuses on “artisanal vintages” and cognacs for the collector markets. Cognac Jean Grosperrin does not generally provide VS/VSOP/XO cognacs or even single barrel cognacs but rather cognacs from specific terroirs such as Fins Bois for instance, and specific vintage year such as 1989 or a combination of the above, plus a single estate attribute as well.

Cognac Paul-Marie & Fils is Nicolas Palazzi’s personal brand of cognacs. The name is a tribute to Nicolas’ father “Jean-Marie Palazzi” who was an inspiration for Nicolas’ company. Nicolas sources single barrels in the country side of France’s Cognac region, and bottles about 200 bottles per batch. This is really a micro-cognac business fueled by a genuine passion for cognac while in search of authenticity. Cognac Paul-Marie & Fils is a recent brand which does not offer VS/VSOP/XO cognacs.

Gabriel & Associes Cognac is a subsidiary of Cognac Ferrand wich offers resources to small growers to produce and bottle their cognacs. Under this condition, G&A Cognac maybe in the position of producing some single barrel cognacs in the near future.

Finally, there has been in history a few independent attempts mostly from small producers to bottle their own single barrel cognacs but this is a marginal and an untraditional method of producing bottled cognac.