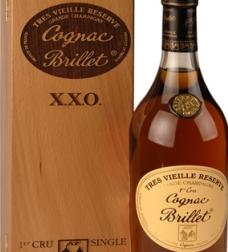 The house of Brillet counts 65 hecatres (150 acres) of vineyards. The estate lies in the heart of the Grande Champagne region, some parts are in the Petite Champagne area. The house exports 70% and 30% get sold in France.

This is a Cognac that claims being in the middle segment of Cognac.

Here are the tasting notes of the Cognac Brillet Très Vieille Reserve:

On the eye: Intense ambour, golden colour
On the nose: Long and delicate on the nose, hints of peach – but a bit light. The attacks are really mild
The taste: Flowery and redolnet of vine shoots, a remarkable intensity of dried fruit, sweet, spices – without being too sharp. Still, there is some acidity which creates a certain freshness.
The finish: Relative long. A very pleasant acquaintance.
Aging : 20 years in Limousin oak barrels: first newer barrels and then in old ones to create this Grand Cru de Cognac.
Producer: Maison Brillet
Origin: Grande Champagne, France

.
Some more background about the Maison Brillet:
In 1656, Guy Brillet created the first pot still in a vineyard, in the Grande Champagne. That was the time when the first double distillation occured. 6 generations later, 1850, Vivien Brillet increased the size of the vineyards, in 1920 Raymond and later his son Jean Brillet started commercialising their Cognac, also produced Pineau de Charente.

Maison Brillet is one of the last remaining houses that produce hand-crafted, single vineyard and unblended Cognacs.

The Maison Brillet distillery is a Bouilleur de Cru. This an expression reserved exclusively for producers which distill from their own vineyards. December to March is traditionally the time of distillation and running the Charentais pot stills (double distillation). Called “Premier Grand Crus” of Cognac, the Brillet Cognacs are produced, and aged in oak barrels and bottled separately “unblended”, this is something special. This is why they are called “Single Grande Champagne” and are from 10 to 100 years old. 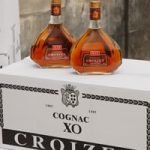