Add all ingredients except champagne into a cocktail shaker with cubed ice and shake hard until well mixed (careful not to over shake as the ice-cream will dilute and split).  Fine strain into a chilled coupette or martini style glass, and top with champagne or sparkling wine.  Enjoy the bubbles.

Although this maybe something a few of you have already tried e.g. PX sherry or Marnier »”>Grand Marnier over ice cream (HIGHLY recommended) – it is not surprising then to learn that since ice cream and cocktails both came into popular fashion during the Victorian period, that some sharp bugger decided to try adding the two… and so we give you the classic cocktail, the Soyer au Champagne.

With the key ingredient described in the name – “to/of Champagne” – the answer as to the definition of Soyer is still open for discussion.  Accordingly to the most basic translations, Soyer can be anything from, a Chinese and Japanese liquid sauce for fish, an Asiatic leguminous herb or possibly a famous Victorian chef by the name of Alexis Bénoist Soyer.  Although I prefer the answer of the liquid sauce for fish, a famous Victorian chef seems a lot more plausible.  Although the name Soyer could be attributed to almost anyone by the same name (not uncommon during the Victorian period) Msr Alexis Soyer was arguably the world’s first celebrity chef travelling worldwide, hosting some of the finest parties of the era and writing many books on the topic.  He also greatly sympathised with the horrendous conditions put upon the poorer classes and fighting soldiers of the time and as such found a fellow compatriot in Florence Nightingale.  During the Crimean War, Soyer spent time on the frontline with the troops where he helped improve army standards by training field chefs in the basic art of cooking and invented the famous Soyers Field Stove which was still found in use 120 years later.

Bringing us back to ice-cream and champagne, it was evident that Soyer was a fan of both with many ice cream recipes published throughout his books (see The Modern Housewife or Ménagère, 1849) including desert recipes which were topped off, soaked or jellied with Champagne.

As for the original author of this cocktail, I’m yet to discover it but according to Ted “Dr Cocktail” Haigh in his fantastic book, Vintage Spirits and Forgotten Cocktails, 2004 – the drink originates around 1888 despite no reference as to where or by whom.  Flicking through a favourite read of mine from the same period, The Flowing Bowl, 1892 by William “The Only” Schmidt (what is it about bartenders and nicknames?) it is clear that ice cream in cocktails was well established with so many of his listed drinks garnished with Schmidt’s favourite signoff, Ornament with fruits and ice-cream. A close punch recipe can also be found under “Champagne Crème Punch” which asks for a whipped egg and sugar mixture (meringue) beaten with orange zest while incrementally adding Champagne.  The whole mixture is then heated over a fire (still beating away) and served warm!

Creative duo, Bompas & Parr brought this classic recipe to the 21st century last year in a cheeky way that only B&P could – sneaking into McDonalds with all the ingredients, and making the drink in a vanilla thick shake.  This from the same Victorian Jelly Mongers that helped create vaporised G+T, an epicurean journey through the history of food in a Victorian Townhouse (video) and the world’s largest punch – complete with radio-controlled garnish and large orange wheels to float on (video).

Whoever the original is credited to and whatever the official serve, ice-cream and alcohol is a marriage made in heaven.  And emphasis the point, here are a few more cognac and ice-cream serves from my little black book – enjoy.

Method: Build all in the order above into a highball glass.  Serve over cubed ice……Awesome!

Method: Shake all ingredients hard over cubed ice and strain into a chilled martini style glass.  Finish with a sprinkle of nutmeg 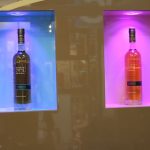