Well, it’s been a busy week or so on the cognac front, with plenty of interesting happenings. From sales in China to comic book shady dealings in a fictional cognac world, Cognac-Expert brings you up to date in all that’s happening in the world of cognac…

It’s been a long haul regarding Chinese sales over the past few years, thanks to the austerity measures introduced by the government regarding gifts. But, if the latest figures from Remy Martin are anything to go by, there’s a hint of green shoots of recovery on the horizon.

Sales for the number three cognac house rose 6.4% in the third quarter of the tax year – and while much of this is due to strong sales in the US, it appears that the Chinese are regaining their thirst for cognac. The demand for spirits in the region is rising, plus a boom in travel has led to increased sales in duty free outlets.

This is a nervous change in trend with regards to the Chinese market, so let’s see if it continues over the coming months: The overall Chinese economy  is experiencing a lot hassle these days. As seen in the past (keyword Japan), economic growth is in correlation with cognac sales.

Remy have taken a rather different approach than their competitors regarding continuing sales in the region. Rather than pumping in less expensive qualities and cutting prices, they’ve continued to concentrate on the high-end segment of the market. In addition, the house changed its Chinese distributor early in 2014, a move that apparently was partly to blame for their decline in sales.

Remy have also brought in some new ambassadors for the brand, including US actor, Jeremy Renner (The Avengers and Mission Impossible) and Chinese Weibo Superstar with 29 million followers, Huang Xiaoming (Wiebo is the Chinese equivalent of Facebook) – along with a new global advertising campaign “One Life / Live Them”.

2.  A close look at Rémy Martin’s US advertising campaign

Clever old Remy, using an age-old technique to get publicity: the color of a person’s skin. Their latest global advertising campaign, launched November 2015, features (in certain regions of the world) not one, but three highly successful guys looking suave and sophisticated (and not to mention, gorgeous), sipping various different Remy Martin cognacs.

Now, perhaps we’re a little naïve, but in our humble opinion, when we saw that Remy had brought Mayiholme Tshwete (Home Affairs spokesperson), Ludwick Marishane (businessman), and Oros Mampofu (actor), on board as ambassadors for the brand in their new advertising campaign – ‘One Life / Live Them’, we simply thought – how cool! But it appears that the fact that all three guys are black apparently has an implication on how black men are represented. And depending on your point of view, this can either be a good thing or a bad thing.

For example, some believe that this is a great step forward, bringing a sense of affluence to black men. It shows that the color of a person’s skin is no longer a hurdle to overcome when it come to being successful in any field you care to work in.

But on the flip side, one Athambile Masola wrote for South African website, Thought Leader, saying, “It’s a pity. Tshwete would have us believe he considers himself an idealist and activist… Posing as a Remy Martin man plays on the caricature of the post-colonial man in a suit, mimicking the image of success as a result of colonialism: the English Gentleman. Instead of imagining an alternative masculinity, the post-colonial society is bankrupt of imagination and takes on a single narrative”.

One thing about controversy is that it certainly guarantees that an advertising campaign gets more mileage.

And with a proposed ban on liquor advertising in South Africa, anything that sees such campaigns following a different path to going viral has to be the plan for any advertising professional. The more that various bans and restrictions are brought into play, the more vital it will be for cognac houses to use the Internet as a way to get their brand message across.

If you’ve got an hour or so to spare, this YouTube video by the self-proclaimed ‘Cognac Maniac’ (not to confused with Cognac Maniacs, one of BNIC’s social media channels) will show you some interesting meetings with various cognac houses, including ABK6 Cognac, Hardy Cognac, Braastad and Delamain – and some rather nice shots of the town of Cognac itself.

You may or may not be aware of the Delacourt ‘Chateau Bordeaux’ comic books, telling the family saga in the world of wine. They’re good fun, and have a strong following amongst wine lovers. And now they’ve branched into the world of cognac, with, “Cognac, Tome 1: La part des demons”.

Released on January 27, 2016, this will be premiered this week at the 43rd International Festival BD Angoulême in the Charente. The plot of this first instalment is said to be a ‘thrilling investigation into the peaceful Charente countryside, where the cognac has the worth of gold and attracts both criminals and speculators’.

Sounds intriguing. So we’ll review this in more detail in a separate article.

5.  A question of vine planting

We’ve reported on this in the past, but when head of Hennessy, Bernard Peillon, lends his voice to an issue, everyone in the industry stands up and takes notice. And this is what has happened in regards to the planting of more vines in the Cognac region.

Last week, Pellion expressed concerns over the future of cognac production. It was back in 2012 when he first warned that is a vital need for further planting – and he’s now advocating a planting increase of around 10% to keep up with demand. It remains to be seen if the industry as a whole will respond – but where the big four lead, we have to say that most tend to follow.

… then the upcoming sale from renowned Parisian restaurant, Tour d’Argent, has a bottle of Grande Fine Clos du Griffier Cognac offered in its upcoming sale (May 06 – May 08 2016). This is just one of the items included in the auction as the restaurant changes it’s logo, dishes and wine stocks.

The pre-auction estimate is between 20,000 – 21,000 euros. And, according to the restaurants sommelier, David Ridgway, “It’s surprising how young this cognac tastes!” We’re sad to say that unfortunately we at Cognac Expert have not had a chance to taste this super rare cognac, so we can’t offer an opinion…. 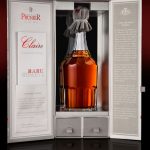