Over a dozen hectares of Rémy Martin vineyards use “sexual confusion” in order to protect the plants from harmful butterflies and moths. A very special method is used, that heavily confuses the insects that are harmful to grapes. Yes! It is the libido-trap for a moth.

Those poor butterflies and moths! The eudémis & cochylis species are actually quite dangerous for the grapes. Once they infiltrate the fruits, the doors are wide open to diseases, including the relentless Botrytis. Now eudemis and friends should no longer point the tip of their little wings on the dozen acres of vineyard of Remy Martin in Touzac. Done through a process called “mating”!

Mating? Quite a funny expression. Now what does it mean? It’s a technique used in other wine regions such as Champagne, Burgundy, but also in Germany and Switzerland.

“The principle is simple: we distribute a product into the vineyards which simulates female pheromones. These pheromones attract males seeking females. So they come and look for females – but there aren’t any. After three or four days they are exhausted and the male butterflies simply go dead”, explains an official of BASF Agro France.

This is quite interesting. So Cognac producers now use butterfly sex techniques to kill harmful insects. Actually this technique is quite expensive but environmentally friendly. Poor little male butterflies.. they are looking for some fun, until death. This is quite a radical solution but allows killing dangerous butterflies without insecticides, without any chemical and dangerous substances.

I asked my dear father who explained to me, that it’s quite an old technique. He calls it pheromone-trap. He also tells me that for each insect variety, a specific pheromone has to be developed. It’s not only used for vineyards but for many other plants as well.

Last week, one could find those capsules in a dozen acres of Remy Martin fields. Rak by name filed by BASF has developed the method – which contain the so-called pheromones.

“Last year, we suffered an attack, so we had to use a special chemical treatment,” explains Denis Fougere, director of Remy Martin vineyards.

500 capsules per hectare, the cost of the “mating” is higher than conventional chemical treatment.

“It takes about 300 € per hectare, the product and the installation costs,” said Philippe Ansiaux. “Against € 200 for insecticides.”

This process guarantees protection against three generations of butterflies. The method also encourages the return of fauna which is useful for vineyards. 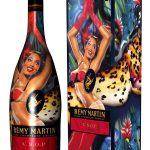