“We are very pleased to partner with T.I. to build upon our successful ‘Things are Getting Interesting’ marketing campaign.”

The rapper will help with promotions, merchandising and digital media campaigns and T.I. added:

“I’ve been a fan of Remy Martin for many years so I’m honored to be working with them as creative consultant. And now after my trip to Cognac, I admire the brand’s genius even more. I’m excited about all the possibilities of this partnership,”

T.I. also teased on a an upcoming signature bottle of Rémy Martin. Let’s see how creative this joint venture can get!

Cognac Expert did a poll, stopped at 83 voters: 58% thought it was a bad idea and 42% thought it would do no harm to the brand of Rémy Martin. 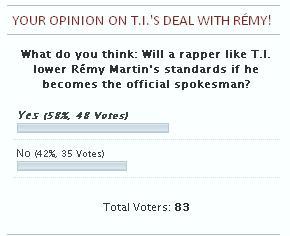 For more opinions of our readers see below.

According to music media, Atlanta Rapper T.I., Clifford Joseph Harris, announced a deal with Remy Martin: He is the new US spokesman of the Cognac house.

Landy has Snoop Dogg, Conjure has Ludacris and So Yang has Chinese popstar Ayi Jihu. Courvoisier had Busta Rhymes and P. Diddy promoting their Cognac… and Rémy Martin now deals with T.I.?

The musician appeared during a show and revealed the news, apparently the official, global face for Remy Martin cognac, calling it “mind blowing”. The entertainer was actually about to promote his upocoming film TAKERS with stars such as Chris Brown and Idris Elba – and his album King Uncaged will be released mid August 2010.

The Rapper also used to be the spokesman of  General Motors. It seems like he was approached by the yak brand which belongs to the four leading Cognac houses.

T.I. recently was released from prison – fullfilling the image of a HipHop gangster who now found realness in life. The rapper’s album tells about the brutal murder of one of his friends, Big Phil, on a tour bus in Cincinnati… Also T.I. is involved in a foundation for troubled children who live in poverty or crime.

See this video of T.I.’s song “Hell Of A Life” to get an impression what kind of brand Rémy Martin is actually counting on:

So the strategy consultants of the big cognac houses stay on that road. Apparently a brand like Rémy Martin does not want to miss the opportunity of getting a part of the US HipHop connection, like Birkedal-Hartmann did with Ludacris.

Cognac Expert will report how Rémy’s strategy looks like, how they’ll use the brand of T.I. to promote their own. Let’s see when we can get to see the first  official press release of Rémy Martin.

On our facebook fanpage there were several, different reactions to the news:

28 T HRILLER / ACT ION THRILLER / ACT ION    29
The Mind Benders
In this disturbing thriller, a brainwashing experiment leads to one
doctor’s total transformation.
The distinguished Professor Shapley of Oxford University shocks the
academic world when he throws himself under a train. Doctor Harry
Longman, a friend of Shapley’s, investigates the mysterious suicide and
concludes that it was Shapley’s research on sensory deprivation which led
him to such dire straits. To prove his point, Longman subjects himself to the
same treatment as the one Professor Shapley underwent: prolonged isolation
in a sensory deprivation tank. When he emerges, he is utterly transformed,
and so is his sense of right and wrong.
“The Mind Benders” is one scary movie. To watch a madly-in-love couple
disintegrate simply to prove a scientific point to a clueless MI5 agent and a
besotted doctor is scarier than imagining the ugliest monster in the universe.”
Movie Magazine International
Leonard Maltin’s ***: “… compelling account of experiments in sensory
deprivation, with espionage theme worked into plot”
1963 – Director: Basil Dearden – With: Dirk Bogarde, Mary Ure
THE NIGHT MY NUMBER CAME UP
Is a pilot’s nightmare of a crash coming true?
At a fashionable dinner party, a pilot reveals a disturbing dream in which
a Tokyo-bound Dakota full of eight people takes off from Bangkok and
crashes in the mountains of Japan. Among those listening is Air Marshal
Hardie, who is due to fly to Tokyo the next day. Hardie initially dismisses the
dream because he is scheduled to fly out in a Liberator, but when Hardie
arrives at the airport in the morning, he discovers that the Liberator has
developed mechanical problems. He must fly a Dakota. Then, just before the
flight departs, two soldiers board the plane. That makes eight passengers.
Hardie fears that the dream may be coming true, and he is destined to die.
**** Leonard Maltin Movie Guide: “First Rate suspense film will have you
holding your breath…”
Screenwriter R.C. Sheriff also wrote Odd Man Out directed by Carol Reed
and The Dam Busters directed by Michael Anderson.
1954 – Director: Leslie Norman – With: Denholm Elliott, Michael Redgrave

Ready for Chinese market: Ayi Jihu chosen as face of So Yang Cognac