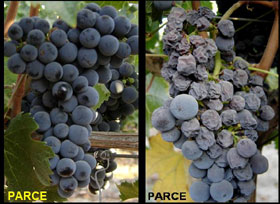 Sebastian Bellis, of the DRAAF Poitou-Charentes, says that they have seen a shift in area of the disease.  Whilst historically it was a problem more situated to the east – department 16, Charente, now there are more incidents across to the west of the country in department 17, Charente-Maritime.  It’s believed that prevailing winds could account for the shift, plus the fact that the vine growers in this area are not so familiar with the early symptoms.

Growers in all regions are required by law to keep records of various procedures and checks.  The large Cognac houses are considering making this mandatory to receive HACCP (Hazard Analysis and Critical Control Point) standard.