As the grand finale of this year’s Vinexpo – which, according to the press, attracted even more visitors than in 2011 – we got into the car one last time, and drove to Jarnac to attend HINE’s exclusive cocktail party in honor of the 250 year anniversary of the cognac family and the Hine family tradition.

As we walked into the building on the shore of the Charente river, some rays of sunshine broke through the thick layer of clouds, which had followed us throughout the week. On arrival, we were greeted by HINE’S Per Even Allaire, and by a futuristic-looking lady on stilts, who was serving guests champagne from a crazy glass structure that was attached to her back.

Immediately after having climbed the first set of stairs, we were maneuvered into a back room, where we were greeted by Bernard Hine and Francois Le Grelle, in order to take the official celebrity photo (which we later received as a giveaway when leaving the party!). Note that Bernard and Max have a similar expression, and so do Francois and Sophie… Not exactly sure what happened there.

Then we had time to have a close look at the exhibition that the team at HINE had put together for guests to experience. The beautiful rooms of the HINE estate were curated to present different aspects of the cognac house’s philosophy, history, and contemporary understanding. We also had the chance to visit the cellars for the first time. Dramatically lit with red spots, guests could tour the cellars and visit HINE’s “paradise”, where they age their oldest eaux-de-vie.

The exhibition walkthrough ended in the courtyard, where we were overwhelmed by a huge crowd – the entire professional world of Cognac was there! It was great to some of the people we had seen at Vinexpo again, in a more relaxed environment. And to see some people who had not made it to Vinexpo, such as Olivier Paultes from Hennessy, who’s been a great supporter, and whose wit and charme we always appreciate. Olivier introduced us to Catherine Le Page, the head of the BNIC, who we hadn’t actually met before, so that was great.

Then guests were paying close attention to the speeches given by, first Francois Le Grelle, and then Bernard Hine. In between we were shown a film HINE that had crafted on this occasion, and which was screened on a number of flatscreens around the courtyard. The film told the history of the 250 year old cognac house, presenting its core values. Later on, we saw a second film about the bottle, which was launched for the birthday: HINE 250, designed by Andree Putman and her Studio Putman, today run by her daughter Olivia.

We even managed to get a short interview with Olivia and her team, where she explained us how they approached this special collaboration with HINE, the first cognac house Putman has worked with. As we were told, Bernard Hine had invited Andree Putman all the way back in 2005 to start thinking about this special bottle. No wonder they produced such a stunning object – they took their time. Once again, HINE shows us how important it is not to rush things, not to overproduce, and most importantly, to give to cognac what it requires most: patience and care.

The bottle HINE 250 is produced by luxury crystal manufacturer Baccarat. And here’s another important detail, which some of you may be interested in… The content! The cognac inside this beautiful carafe is – who would have expected anything else from this traditional house – a vintage cognac. The year reading 1953. At one moment, the master blender Eric Forget gave an introduction to the vintage, telling us about the weather conditions of the year 1953. Apparently it was an extremely dry year, therefore the grapes got a lot of sweetness, the wine therefore plenty of sugar, and the eau-de-vie distilled from the wine hence ideal conditions for ageing and developing a strong body over decades. And suddenly, the waiters carried out huge trays of cognac glasses – for everyone to get a taste of this exquisite cognac. Perfectly positioned next to Herve Bache-Gabrielsen, Olivier Blanc from Leopold Gourmel and Hennessy’s Olivier Paultes, we could observe these masters of cognac tasting this sixty year old millesime. Quite obviously, everyone agreed on the outstanding quality of this extremely round and strong-bodied cognac.

By the way: Here is the video (5 minutes) we made about HINE


The evening continued with more interesting conversations, feedbacks about Vinexpo, acquaintances with professionals such as Richard Braastad, Jean-Sébastien Robicquet from G’Vine, and Thierry Verrat the Michelin starred chef from La Ribaudiere, who was responsible for the delicious food that was carried around all night. We need to go back to his restaurant – it’s been years since we last went (it’s slightly on the pricey side, therefore only for special occasions).

Of course there were Chinese whispers about the upcoming sale of HINE, but Francois Le Grelle managed to divert any rumors by reading out a very funny ‘personal ad’, which went something like “Searching a sensitive partner, respectable of values and tradition, open for new joint adventures; Offering intellect and a strong-willed personality, ready to invest in a loooong future.”

All in all, a beautiful evening in a very special setting, with delicious food and wine, and great company. HINE has every right to feel proud to celebrate this anniversary. As we were leaving, we were both handed a bag with a bottle of HINE “Homage to Thomas Hine” and two publications the cognac houses published especially on this occasion, together with our star photo.

As always, the cognac house did a great job. HINE, if you want to do us a favor: Stay classy, stay British. 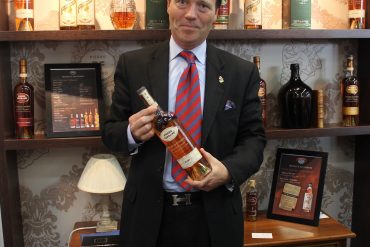 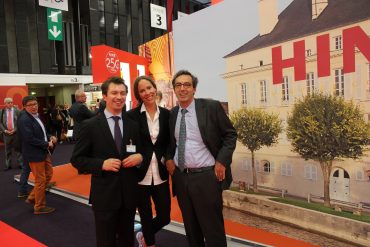 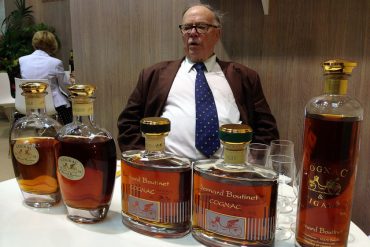