Not only a stamp, created for the ‘national marriage’, but also a Cognac. On June 1, Grönstedts launched a new Cognac on the special occasion of the upcoming royal wedding between Princess Victoria of Sweden and her fiancé Daniel Westling. The big day is set for June 19 and will be held in the Nikolai Church in Stockholm. The date has tradition: Already Victoria’s parents, King Carl Gustav and Queen Silvia got married on this day in 1976. The cognac has been named “National Marriage 2010”. It is the seventh consecutive year that Grönstedts releases a cognac in their National Series.

Grönstedts’ master blender Folke Anderson confirmed that the new product was a response to this year’s grand event, which has already been named “this year’s National Wedding” by the Swedes. As a cognac expert, Anderson thinks it can be seen as a perfect blend between a strong Cru Grande Champagne and an elegant Petite Champagne of its own.

Since the drink cognac is not part of the official wedding ceremony (who wants to pass on a glass of Champagne on such an occasion!), the special Cru will not be served at the actual wedding. Grönstedts rather makes use of the occasion for Marketing purposes: to create a label for ALL princes and princesses in general. Folke Anderson also said that he happens to know the Maitre ‘d responsible for the royal wedding dinner, so there might just be a chance of the cognac to be enjoyed later on in the evening… Let’s hope so, for the happy couple and its guests!

Grönstedts’ “National Marriage 2010” cognac is 30 years old and contains blends that are up to 60 years old. It is stated that the average age of the blend is 40 years.

“National Marriage 2010” is unusually dry and austere to be from Grönstedts. Folke confirms this and says that this is thanks to the vast majority from the Grande Champagne (80%). It takes time to approach this cognac. It has hints of menthol and cedar as well as scents of orange peel. Vanilla and oak also feature in the mix, which becomes evident in the taste.

About the Cognac house Grönstedts

Grönstedts is a Swedish cognac brand, which since 2009 is owned by the Finnish Altia Corporation. Before that it used to be owned by Grönstedts Wine & Spirits, they imported the raw eaux-de-vie to Sweden, where it was aged, blended and bottled. After Wine & Sprits were sold to French Pernod Ricard in 2008, the brand was sold to Finnish Altia.

A range of Cognacs are sold in Grönstedts name. The two most kown are Grönstedts VS and Grönstedts Monopoly (which is a VSOP), and Grönstedt also produces even more exclusive bottes; released in limited editions.

In 2008 Grönstedts blending and bottling site was moved from Sundsvall to France. 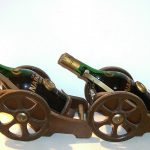