At what time of the year do people worldwide look for Cognac?

Well, apparently people always search for cognac right before Christmas. This can’t be a coincidence. It must be the Christmas present?!

If one now looks at three other, far bigger spirits, namely Vodka, Gin and Whiskey (‘Whisky’ is much smaller than ‘Whiskey’) it becomes quite clear that Cognac plays a relatively small role in the world spirit market. Gin is 2,6 times more interesting, Whiskey 3,4 times more interesting and Vodka even 4,5 times more relevant to people. But the Chrismas present assumption is perfectly proven, as people like to get drunk at Christmas and New Year’s Eve! 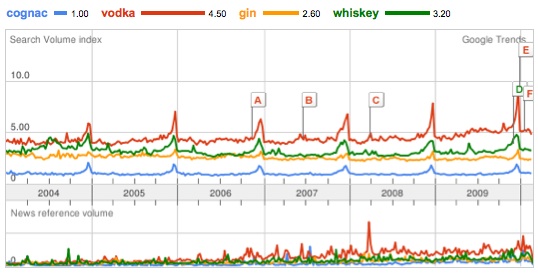 Interesting too see, how Vodka gets bigger and bigger over the years: The Vodka Christmas peaks are much higher than other peaks.

Which of the four Top Cognac brands is the most popular?

The 4 market players Hennessy, Martell, Courvoisier and of course Rémy Martin share 80% of the market (and the top 10 houses cover 90% of the world wide market). Hennessy is the market leader.

Now let’s have a closer look at the popularity of each brand and the development of the related worldwide awareness.

There are 5 things one notices:

In the US, Hennessy “grows” even more and keeps the three other brands at a far distance. Most of the people who search Cognac in the US come from Georgia and the state of New York. 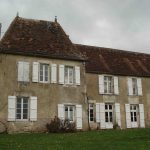