Let’s have a look at this Conjure Cognac product placement in NO STRINGS ATTACHED with Ashton Kutcher. Let’s think about it: This movie had a domestic total gross: $70,662,220 and worldwide $147,780,440 – that’s a lot of eyes on one product.

Ludacris talks to a young woman while his friend opens the Conjure Cognac bottle.

Pouring the mixable cognac into a glass.. while Ashton Kutcher arrives.

Here is another one, actually the title has already the word “cognac”: There is this 1964 film called Monsieur Cognac aka Wild and Wonderful.
Here is the pitch: “Cognac, a pampered poodle and popular star on French television, creates marital problems for his pretty owner Giselle when he becomes jealous of her new husband.”

Another movie is from 1988 and called Tajna manastirske rakije aka “Cognac” which is the English title. Apparently it is one of the best Yugoslavian movies of all times. On IMDB, it says “true masterpiece”. Unfortunately it remains very unclear what the story is about. Where is the link to Cognac? In one scene two of the major characters are in a quiet bar, and the male drinks two shots of vodka while the female drinks a shot of cognac.

Below we see a screenshot of the horror film 1408 with John Cusack and Samuel L. Jackson – a bottle of cognac makes an appearance.

As swedish website blog.cognacsociety.se reports, this cognac is called “Les Cinquante Sept Décès”. But this brand does not really exist…

The disputed film director Lars von Trier has used Hennessy XO Extra Old in the wedding scene of his most recent movie Melancholia. Van Trier was highly criticized at the Cannes Film Festival 2011 for making comments about fascism, Hitler and his own Nazi heritage during the press conference.

In the film, Kirsten Dunst and Alexander Skarsgård get married on the eve of a planet hitting Earth. The wedding turns into an intense family drama, with the beautiful bride struggling to enjoy her special day.

Or what about James Bond? Bond is a connoisseur, not a generic consumer.

In Bond’s first story, in the book Casino Royale, he consumes an Americano (a Cognac and water). It’s Bond’s first drink on record and occurs 30 pages into Fleming’s debut novel “Casino Royale.” Later he drinks (of course) a Martini, some bottles of vintage Champagne and some brandy.

Bond never sticks to one drink, that would be terribly boring to him. As the website AtomicMartinis states, James Bond had 431 drinks so far, 24 of these were brandy.

The first time Bond drops some cognac knowledge is in early Bon movie “Goldfinger”: At a dinner scene Bon discusses a cognac and says:  “I’d say it was a 30 year old finé indifferently blended Sir,……..with an overdose of Bon Bois.”

In another 007, “On Her Majesty’s Secret Service” Bond talks to a rescue dog (as he is in the snow): “Please go get a cognac. Five-star Hennessy course!”.

In the film “Diamonds Are Forever” Bond finds a new use for a bottle of cognac Courvoisier: He neutralises Mr. Kidd by splashing cognac on the flaming skewers, setting Kidd on fire.

Let’s have a look what Bond drinks: 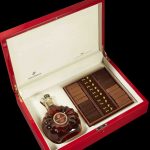 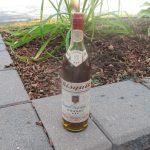 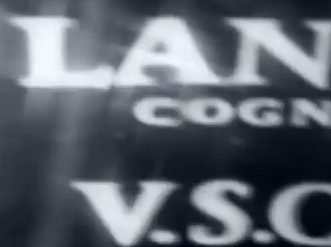 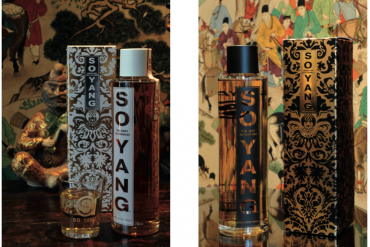