The cognac house Meukow is one of the few big cognac houses still holding on to the structure of the family business. To be able to keep up with the competition, the family created the Compagnie de Guyenne (CDG) in 1969, an umbrella company that Meukow is today part of and which includes a number of smaller cognac houses associated with Meukow, Réau, Foucauld, Meukow, Georges-Courant, Brugerolle, Rouyer-Guillet, (Saintes), Favreau, Richard (Saint-Jean-d’Angély).

In 1862 Karl and August Meukow from former Silesia traveled to Charente in the name of the Russian Tsar at the time. They were supposed to select Cognac from the region. In the same year they founded the cognac house Meukow and never returned to Russia. Since then, Meukow has built on a strong history of family members to run the business. Today, Philippe Coste is Meukow’s CEO and is assisted by Claude Brugerolle, the company’s head of sales.  The distillery at Matha is housed at the historical estate of Brugerolle in the Charente Maritime.

The famous logo of the luxury cognac brand is the black panther, which can be seen on all its products. This ‘mascot’, designed by Michel Coste (Philippe’s father), was created in 1995. 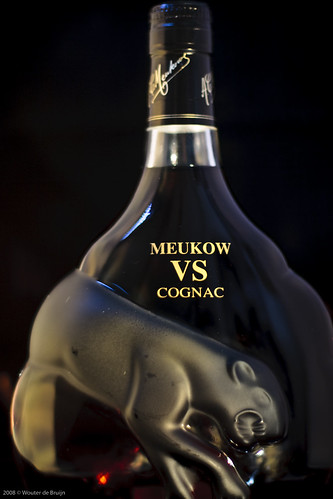 The distillery in Matha has been recently renovated to the most modern standards and represents one of the technologically advanced cognac productions to date. Next to the bottling unit, which was entirely restored in 2001 with six production lines and churned out 13 million bottles in 2009, there is a brand new reception dock, a capacity of barrels that can accommodate 18.000 hectoliters and a new building for delivery and pick-up.  Meukow is only lacking an automatic organising system to move around the crates. The cost for the entire modernisation was around 1,4 million Euros, including the soon to come robot for the crating system.

The Compagnie de Guyenne also covers other spirits, namely Armagnac, Brandy, Whisky, Vodka, Gin, Rhum and Pineau. They employ  82 people in total and make an average gross turnaround of 35 million Euros of which 50% are cognac, 25% brandy, 15% Pineau and 10% other products.

Regarding the relatively young history of the distillery, which was founded under its current name in 1947, it takes an imporant position in the cognac world today. The site of Meukow as it is known today used to be part of Brugerolle cognac since 1847 and only became a part of the CDG in 1987. One of its CEOs, Andre Brugerolle, became mayor of Matha from 1958 to 1978 and even an important politician.

“We could have chosen to stock our spirits in a highly designed site at the periphery of Cognac, but chose the Brugerolle site for its sentimental value and family traditions,” says Philippe Coste in a recent interview. “Here there is a soul.”

The family has always been locally very supportive and has restored the old clock tower and the family chapel in the town. Quite logical then, that the next cognac that the house will launch is called “Esprit de Famille”, symbolising the house’s generation-long value in keeping this cognac in the hands of the family.

A literary side kick: In 1929, the German poet  Joachim Ringelnatz wrote in his poem Winterflug:

Ich hätte gar zu gern geraucht
Und einen Meukow mir bestellt
Und eine Frau vor mir gezwickt.
(I would love to have smoked,
to have ordered a Meukow,
and to have pinched the woman in front of me.)


In 2004, MEUKOW VSOP Superior was awarded the Gold Medal and the Cognac Trophy for BEST COGNAC at the International Wine and Spirit Competition in London.

In 2008, International Taste and Quality Institute honoured the product MEUKOW VANILLA with a Superior Taste Award and two Stars for its remarkable quality.

Some of the large range of products: 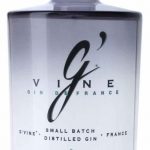 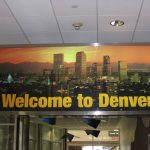 Cognac Camus tries to get into the US game. Where? Denver. (Video)