Hilarious! This must be a bad joke: Four of the major cognac producers in the Charente and Charente Maritimes have received letters from Regional Directorate of Customs telling them that because of the polluting effect of cognac and brandy during the distillation process, that they must pay tax on this.

What this is referring to is the volatile organic compounds (VOC’s) which are produced during the natural evaporation process.  This is traditionally known as the ‘Angel’s Share.’

If you would like to know more about the Angel’s Share, and why it is so important for Cognac ageing, see here.

But the French tax authorities are now saying that this should be included in the ‘general tax on polluting activities’ (TGAP) and that the distillers legitimately owe this tax.

Of course, the BNIC has immediately responded by sending a letter of complaint to the Ministry of Budget and Ecology.  An unnamed source at the BNIC has said that this is like the continually rumbling debate about cow farts being accused of pollution.  But if we wish to consume beef, milk and their by products, then we have to put up with the farting and burping!  In the same way, if we want to continue to enjoy cognac, then evaporation is part of the process.

But before you dissolve into childish giggles at the comparison, you should be aware that other countries, such as Denmark and Ireland, are also considering a cow fart tax.

The ‘Angels Share’ is the natural evaporation of alcohol, and therefore ethanol, and around 3-6% of the eaux-de-vie is lost in this way every year.

But why the sudden taxation now?  No-one is quite sure.  But Catherine Le Page, director of the trade association, is taking this very seriously, as although it may just start as a taxation for the large producers, who is to say that it will not trickle down and affect the smaller distillers before long.

It’s just another fight for the BNIC against the might of the government. 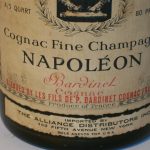