Well, this was a slightly different type of visit for me to make, because Le Baume de Bouteville is not a cognac house. It is, in fact, a creator of artisan French balsamique vinegar.
So what on earth has that got to do with cognac? Well, as it turns out, quite a lot. 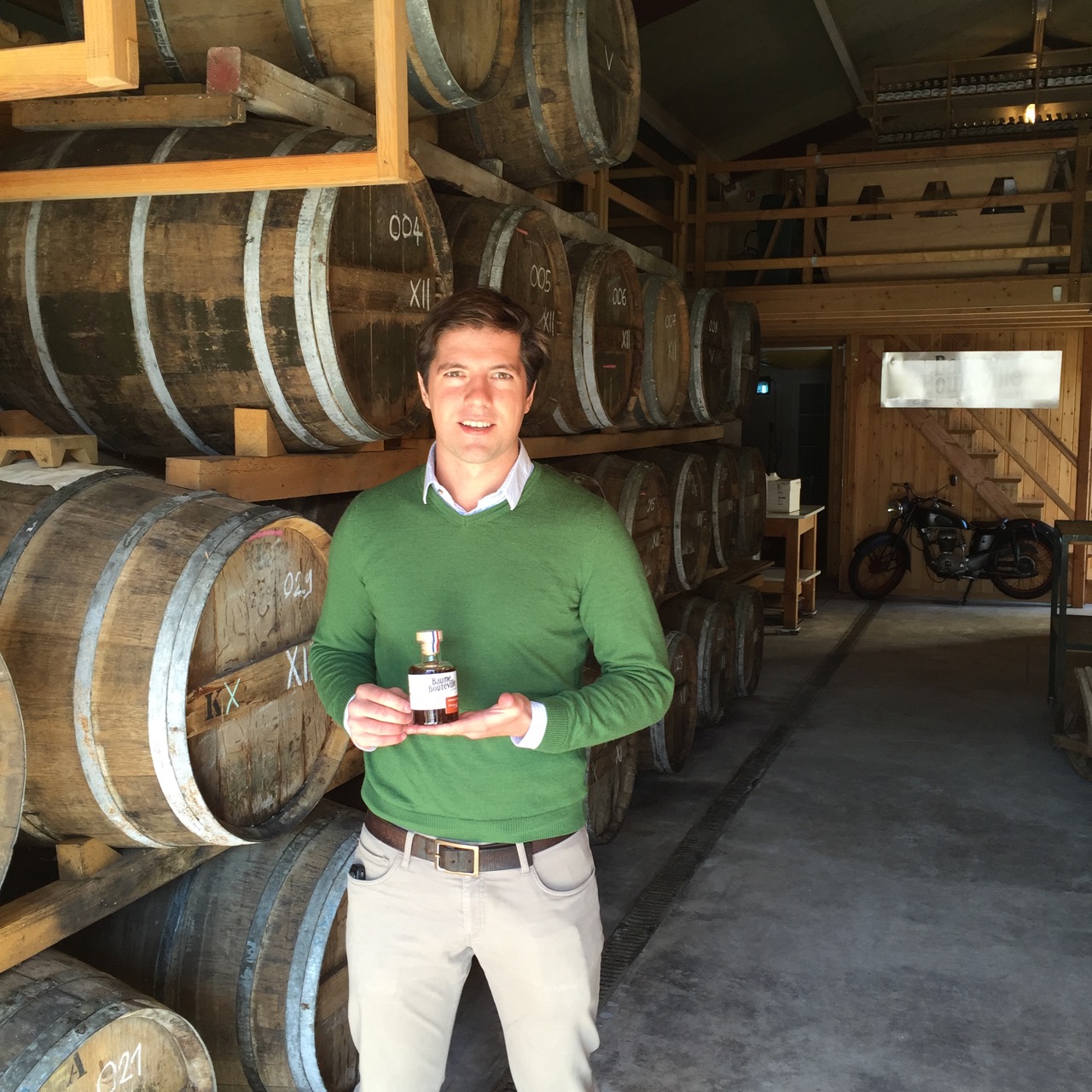 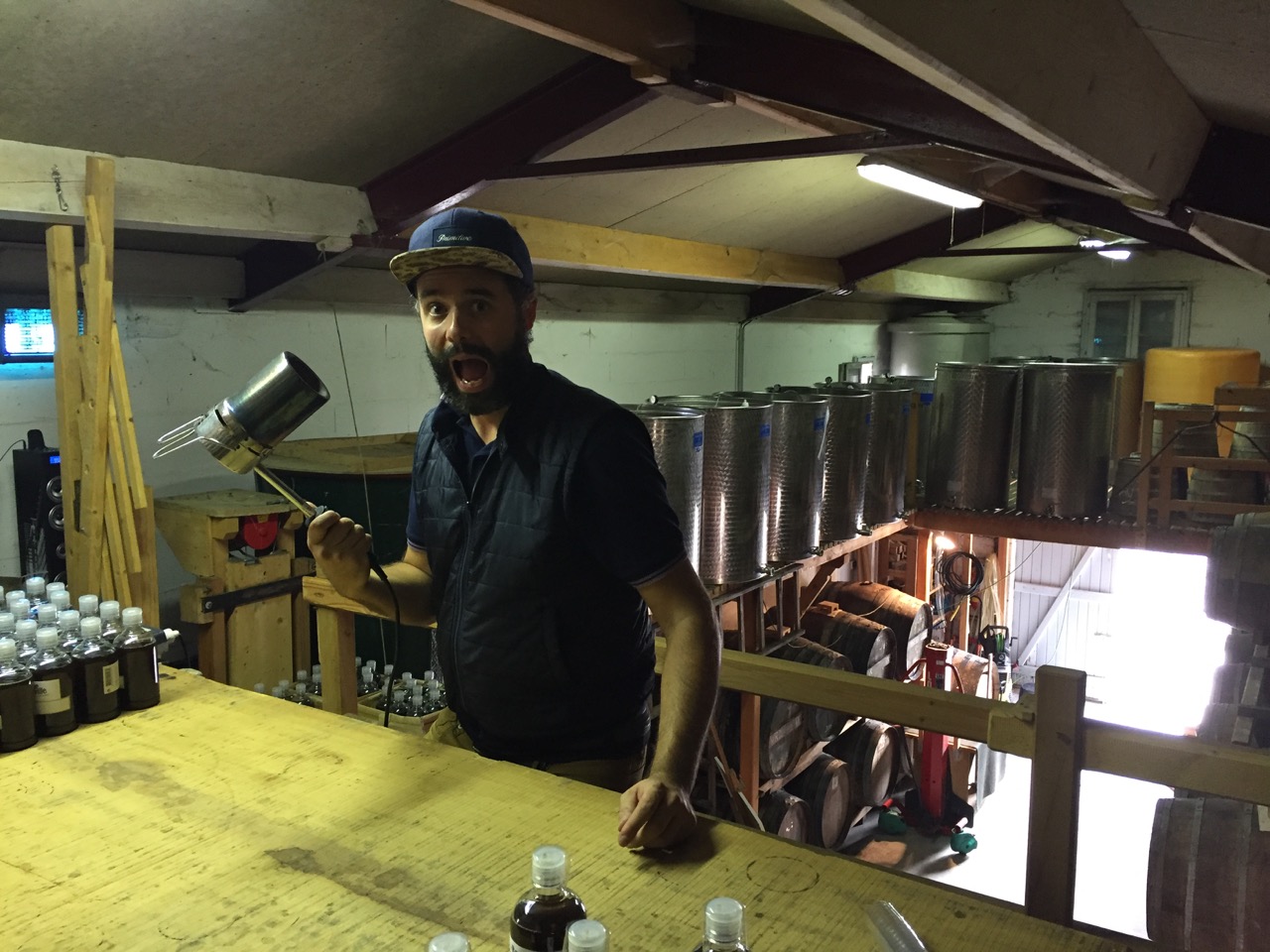 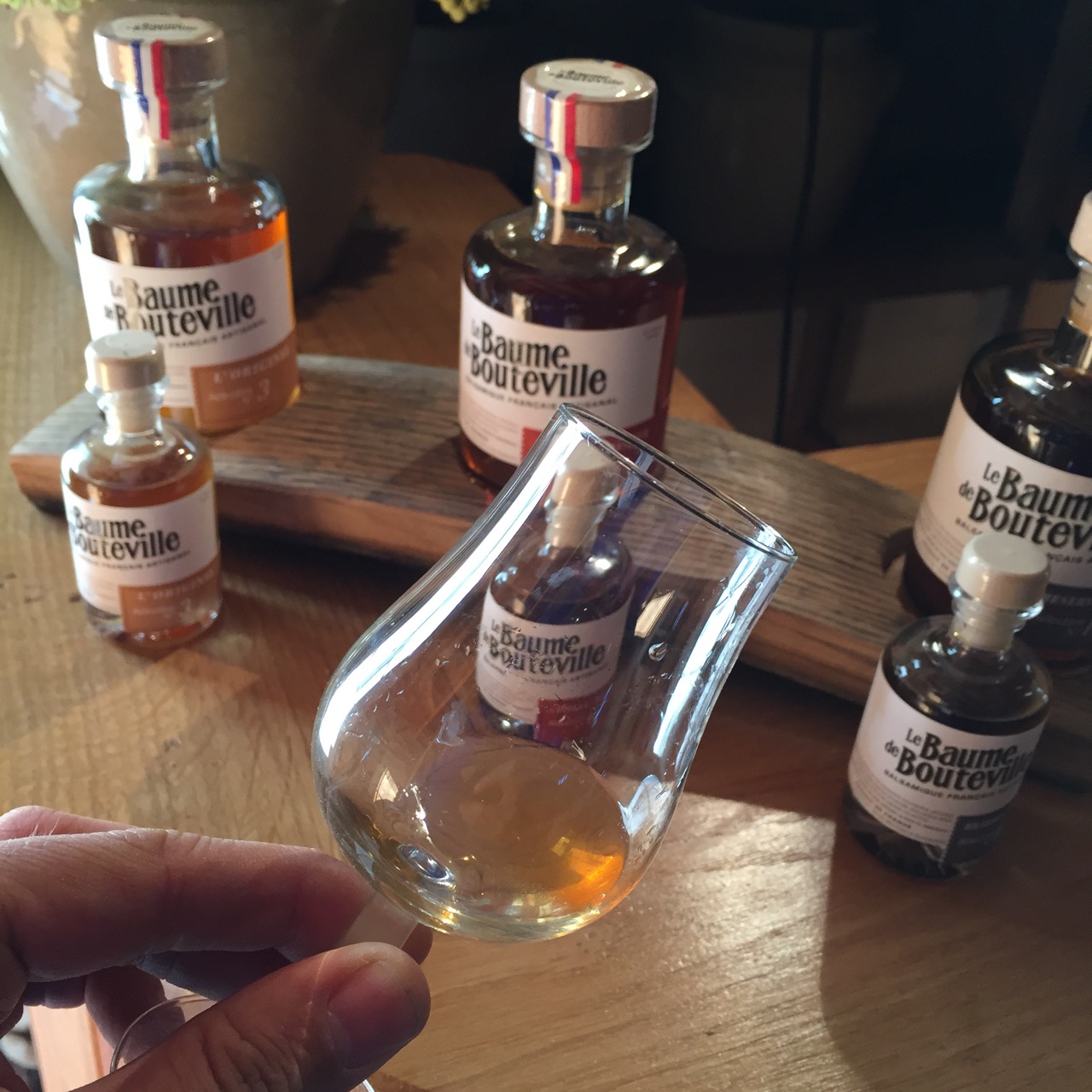 So Lionel and Cedric decided to take over the artisan balsamique production, Le Baume de Bouteville. This is located in the heart of the Grande Champagne region of Cognac. And guess what? Such balsamic balsamique is produced from Ugni Blanc grapes (as is cognac), and slowly matured in French oak barrels. It’s also heated at harvest in copper pots adapted from local distillation alembics. And it gets a controlled aging process over many years, again, as is cognac. With the difference that it is a double transformation of heated grape must, and not of fermented wine. Yet, the equipment is almost the same. Hmmm – the similarities were beginning to intrigue me. So when they invited me to visit, I jumped at the chance. 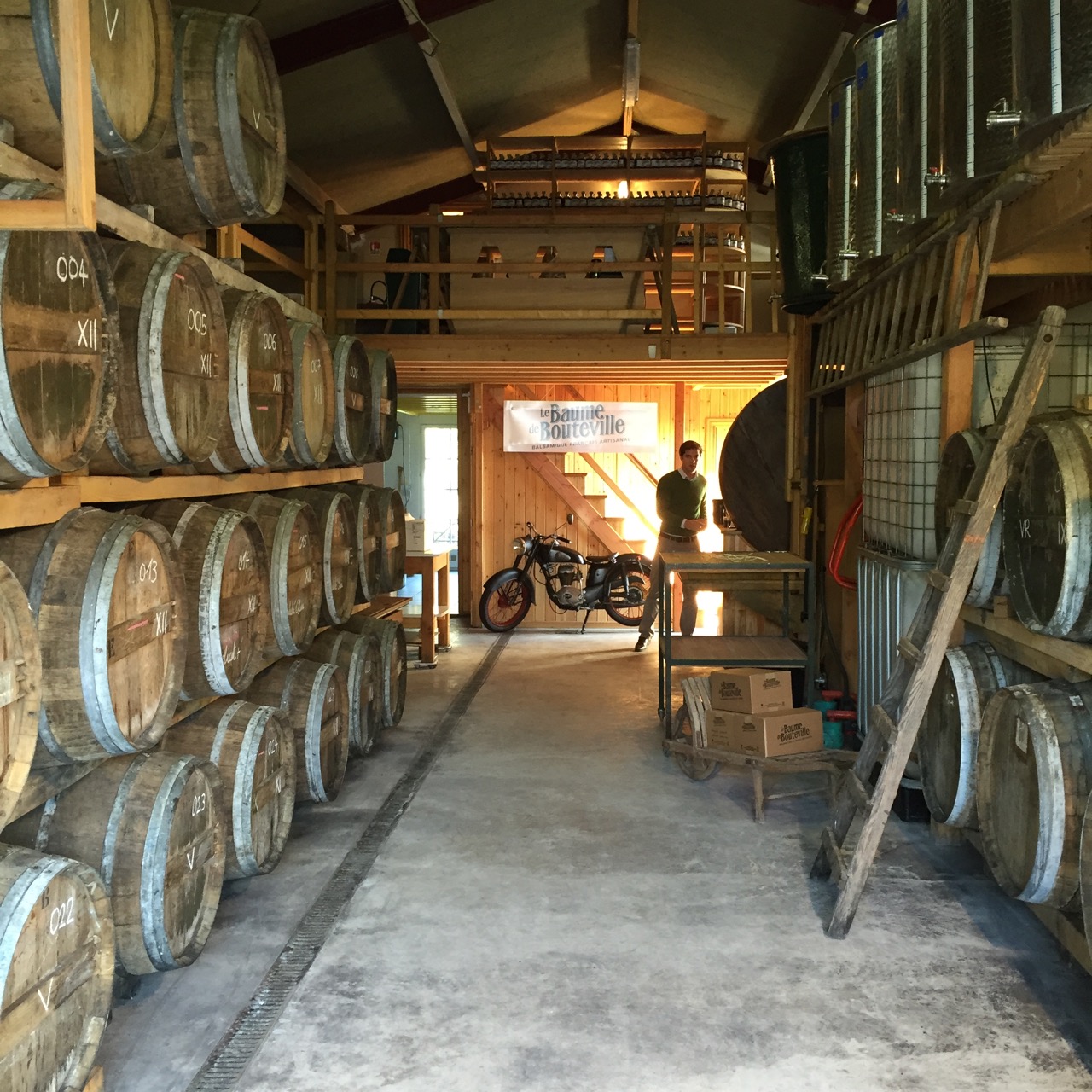 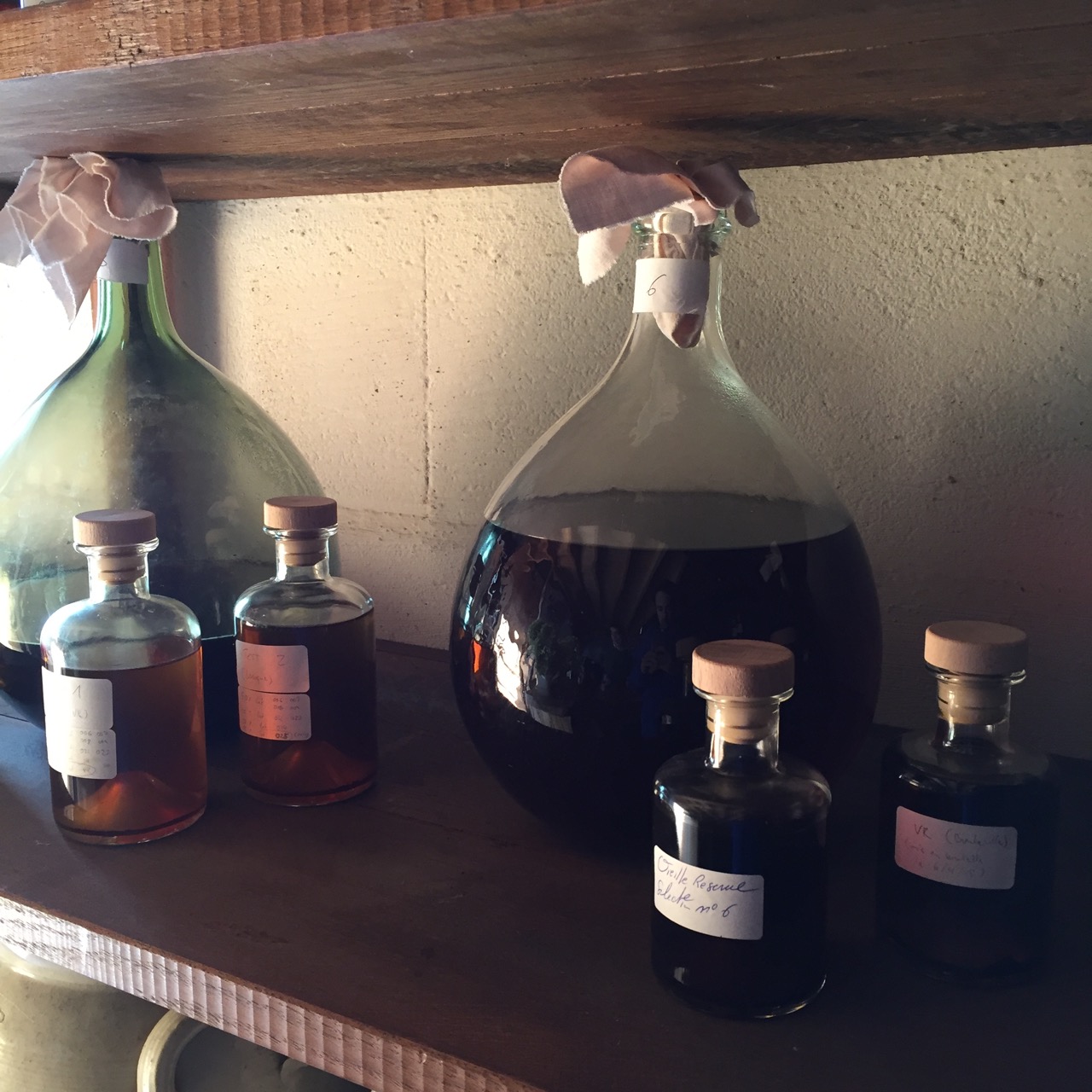 A few days later saw me arrive at ‘La Fabrique’, which is the name for the balsamique production factory in Cognac. The village of Bouteville is beautiful – it’s also where big artisan cognac producers such as Paul Giraud are located. We’re talking super high quality artisan cognac houses with excellent reputations. The balsamique factory is certainly in good company. 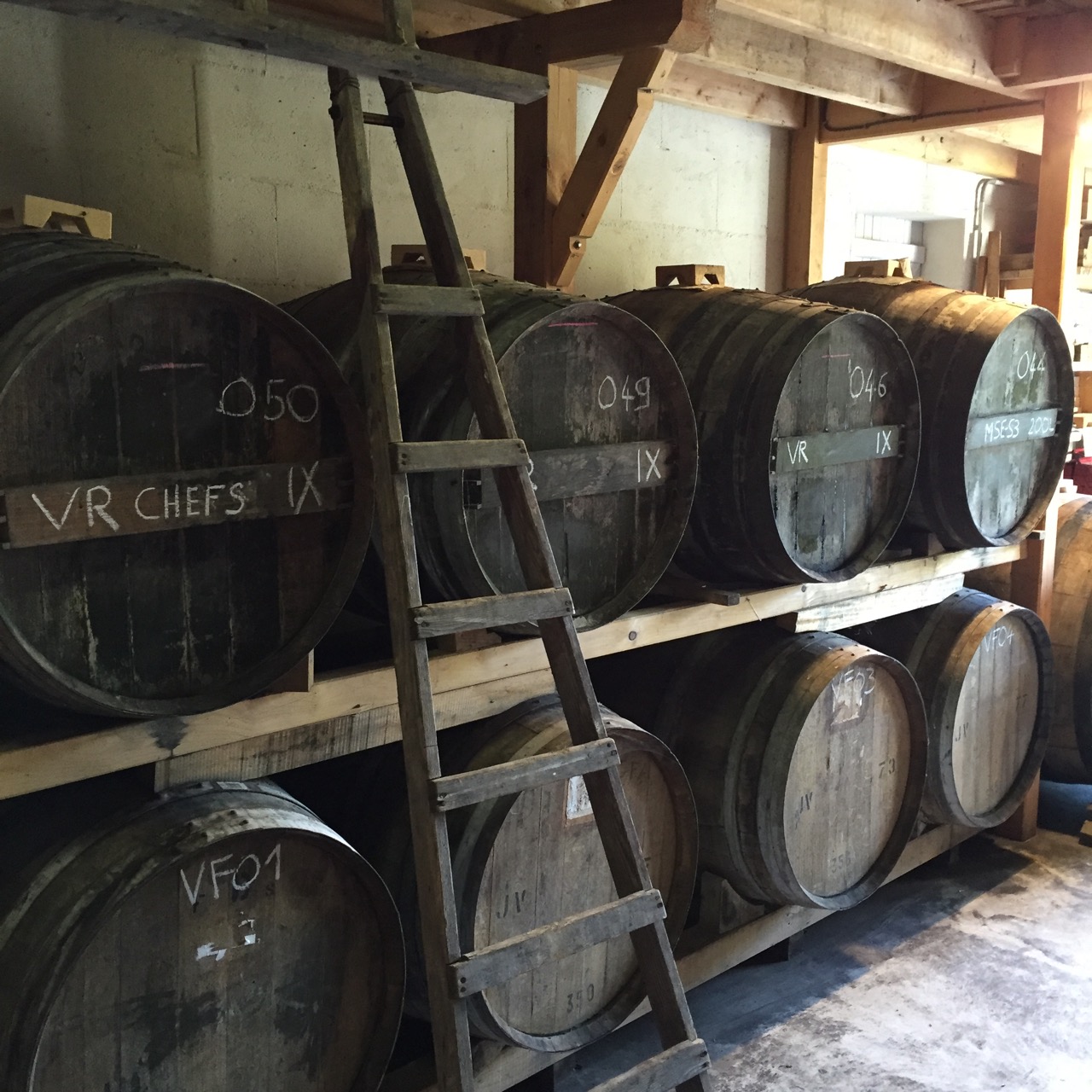 You pass the chateau at the bottom of the gardens, and this is where Le Fabrique is located. It’s filled to the rafters with familiar looking barrels. And it’s because, I learn, that the balsamique is aged in old cognac barrels. 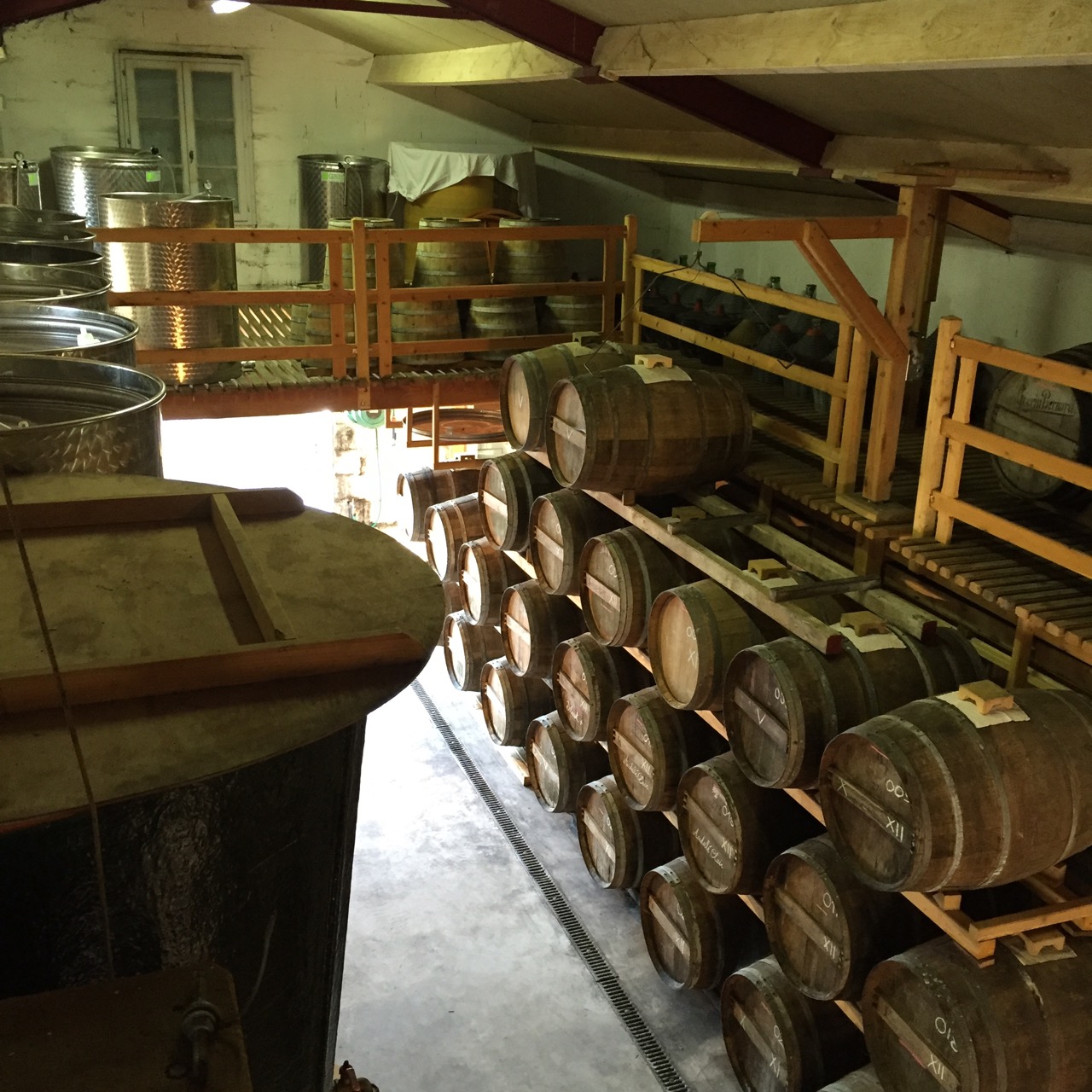 Lionel also tells me that after the September harvest, the grape juice is first reduced, then distilled using copper pots that are in reality transformed alembic stills: yet another similarity to cognac production: copper is the best material for this production, since it perfectly conducts the temperature on the inside surface (like in local distillery pots). The aging process for balsamique takes place in oak barrels for a minimum of 18 months. But when it comes to Baume de Bouteville balsamic vinegar, the lowest grade (known as l’Original) isn’t reached until three years. And it takes 10 years of aging to reach what is known as ‘supreme quality’ (La Réserve Exclusive). 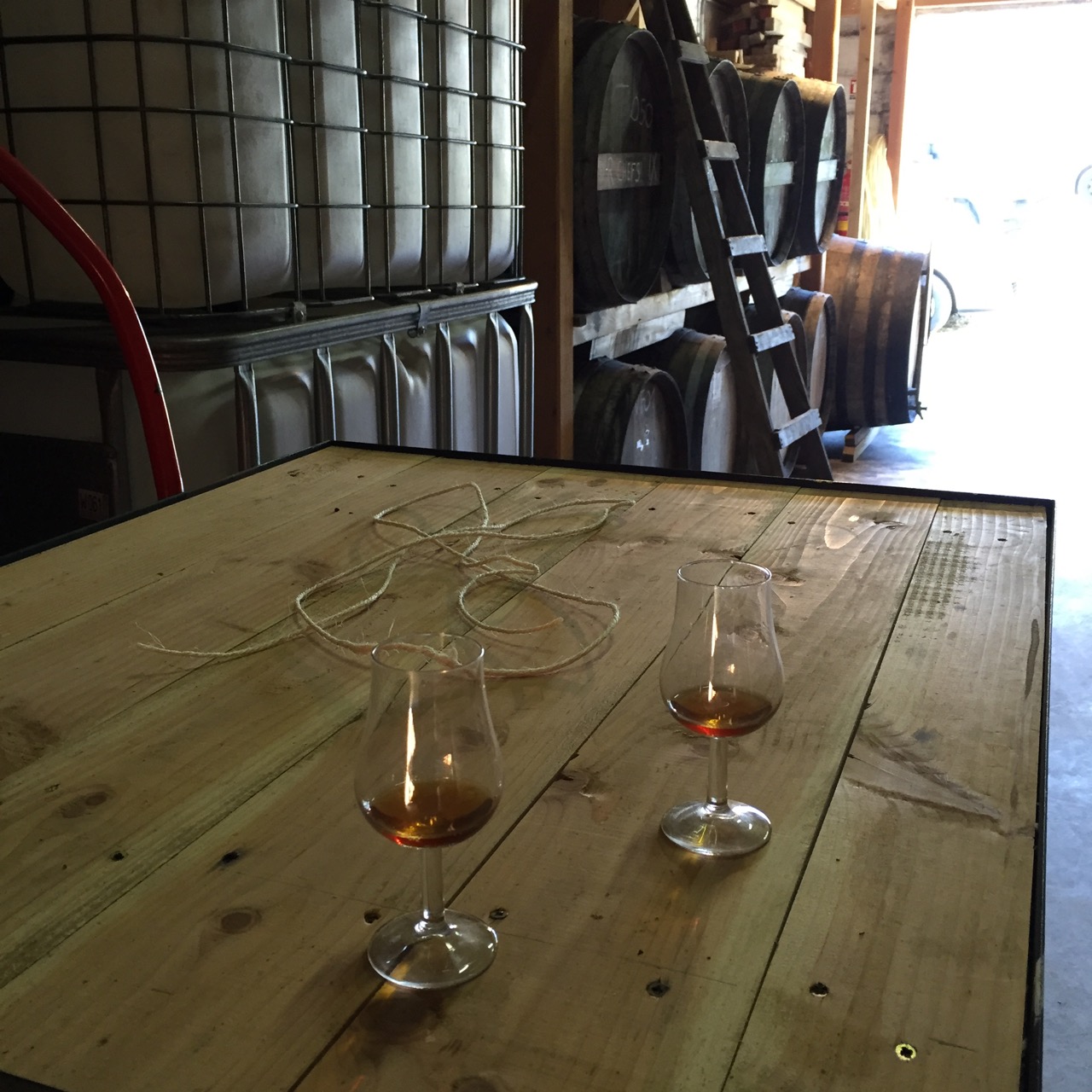 The creation of the vinegar is all about the same three qualities as that of cognac: Grapes, oak and time.

1. The supplying vineyards take care of the grapes during winter, spring and summer.
2. At harvest in September: 100% freshly pressed grape juice (with pulp) is delivered to the production site, “chauffe” in copper pot alembics for 24 hours.
3. Decanting of the now concentrated grape juice for several months, slow settling of the lees.
4. The juice is transferred to oak barrels (having contained eau-de-vie from the region) in their own ageing cellar, where it starts the slow and controlled transformation process for a minimum of 18 months.
5. The four seasons and the temperature variations of the French Atlantic climate are necessary for the natural transformation process.
6. After supervision of the aging process, and careful selection by the cellar master, the now finished Baume de Bouteville is poured into bottles – ready for the customer to enjoy.
In the same way that the quality of cognac is influenced by the quality of the harvest and variants year on year, Baume de Bouteville balsamic is divided up into different selections. L’Original is the youngest product – a blend consisting of barrels aged between two and five years. 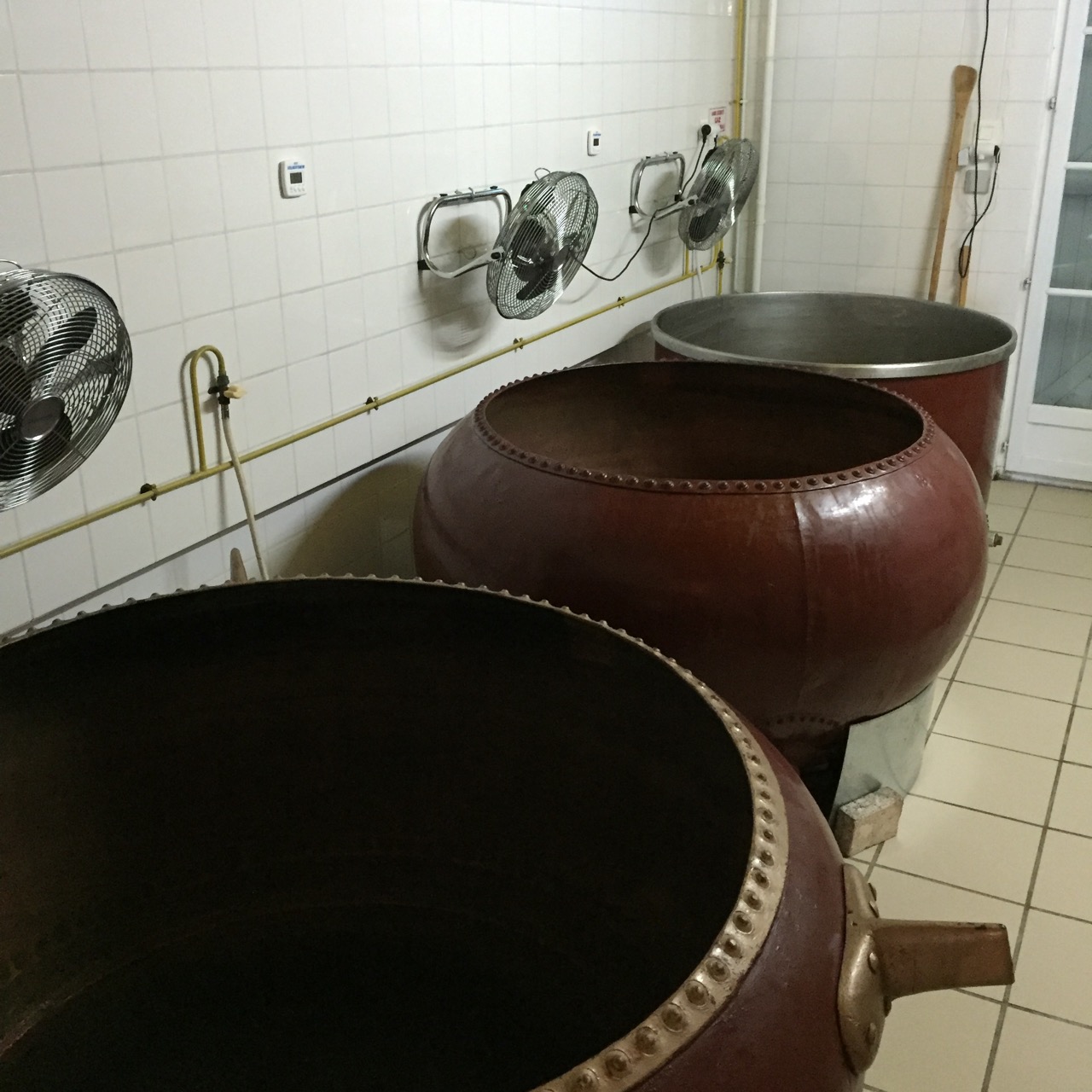 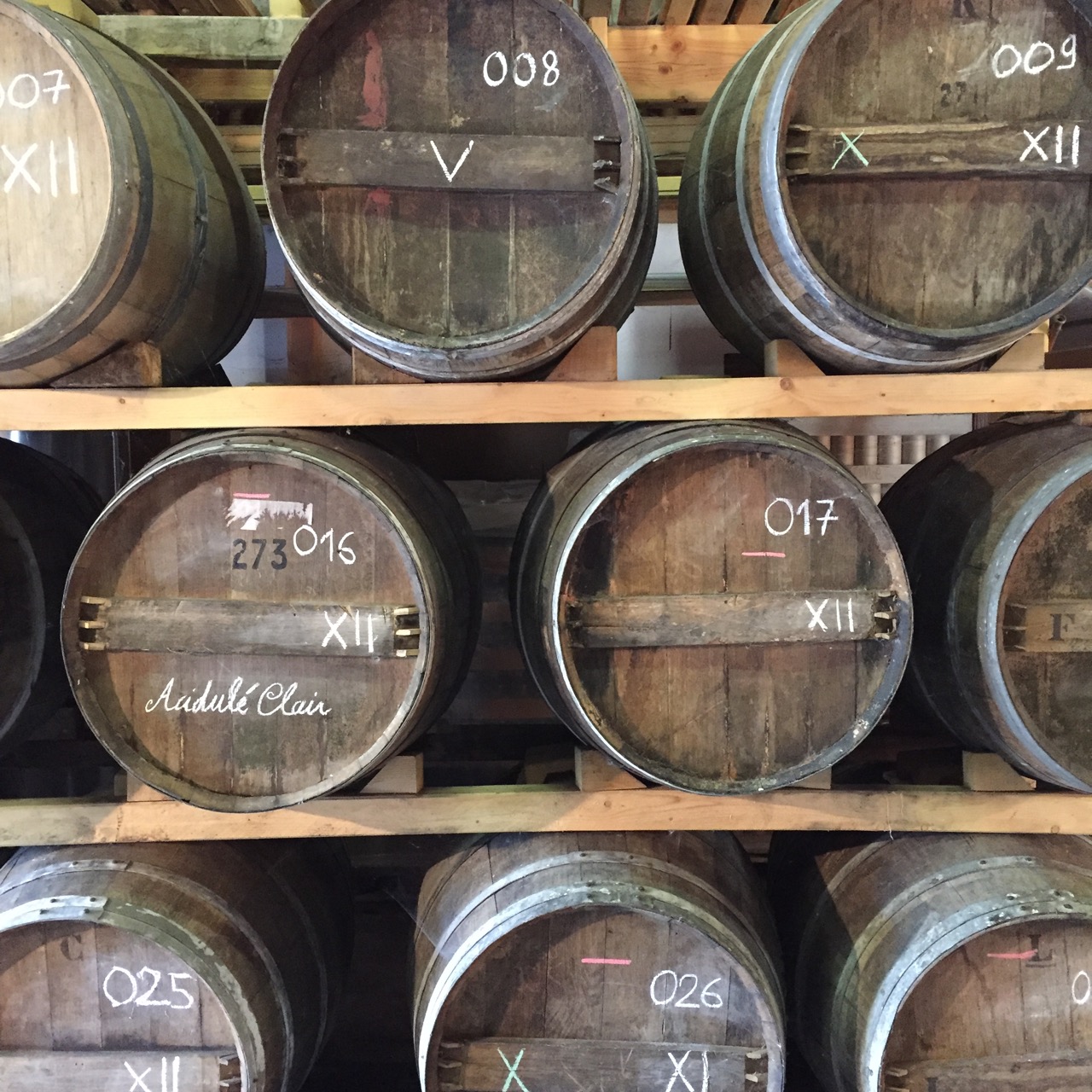 Then there are two older products, Vieille Réserve and Reserve Exclusive – both are single cask products that are aged for between six to ten years.

I asked what the difference was between this balsamic vinegar and that produced in Modena, Italy. And it’s this very ‘cognac-like’ process and local ingredients that sets it apart. The end product is far less dense in sugar, with more focus on the freshness and complexity of the grape variety than its Italian counterpart. Baume de Bouteville was not created with the intention of copying traditional balsamic vinegar. It was made to be something similar, with a distinctly French twist. And I certainly think they’ve managed exactly that. 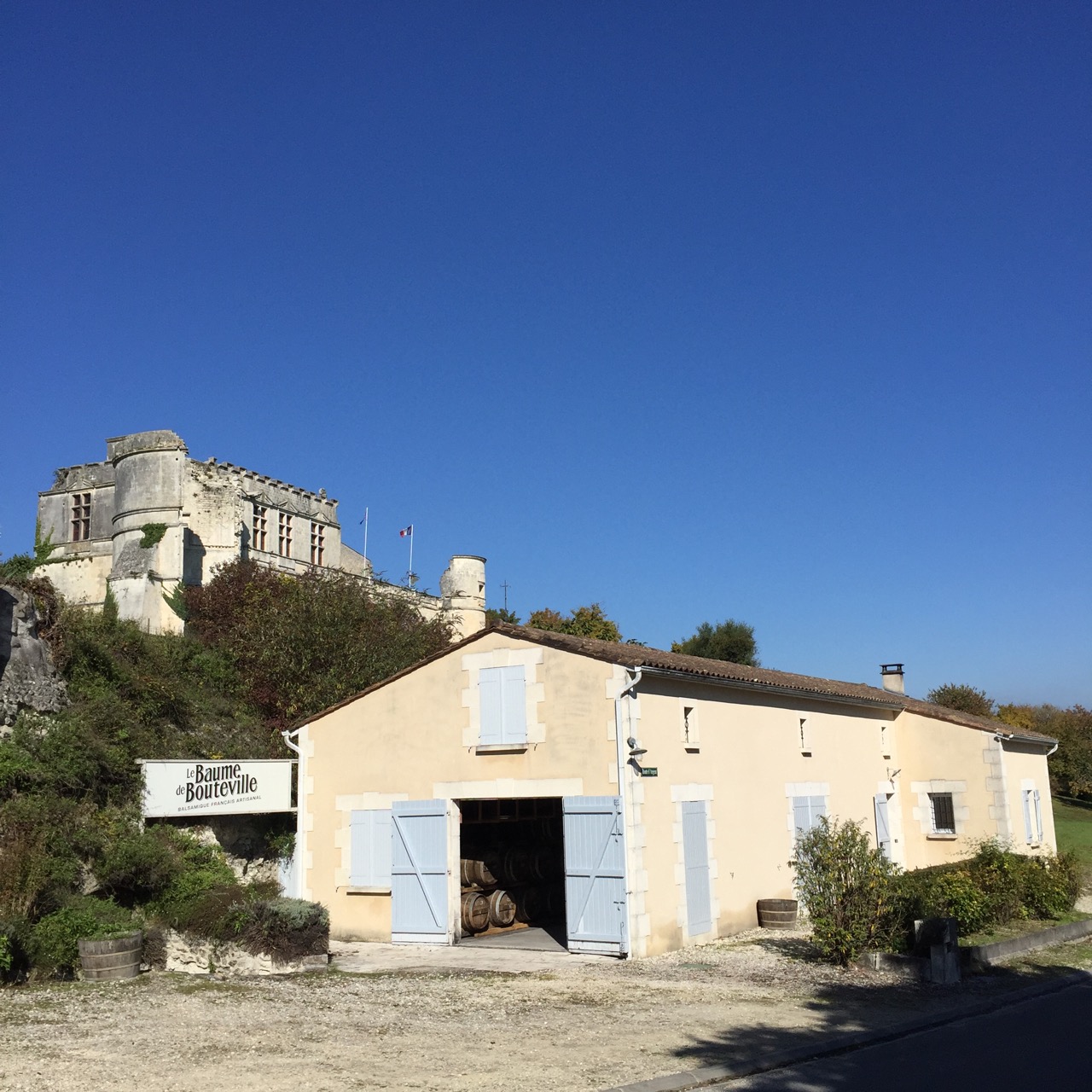 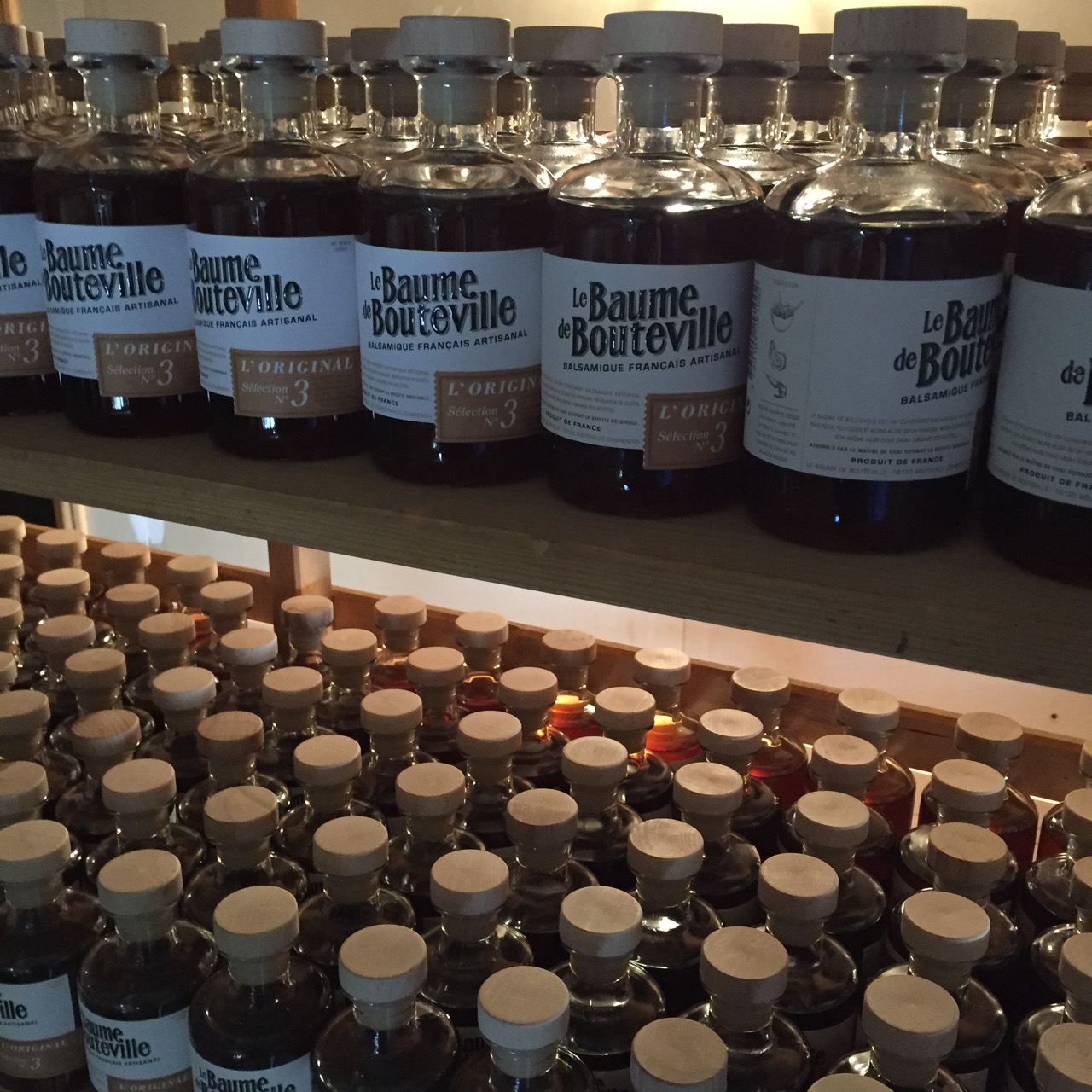 Through their experience within grape production, marketing, and as lovers of good distilled spirits, Lionel and Cedric have certainly made a good choice with Le Baume de Bouteville. They have great knowledge through the founder and Maitre de Chai, who understands exactly what is needed to create such an artisan product. The product was good before they purchased it, and is now gaining a real reputation in French gastronomy (and beyond). What Lionel and Cedric want to do is further build on that reputation. 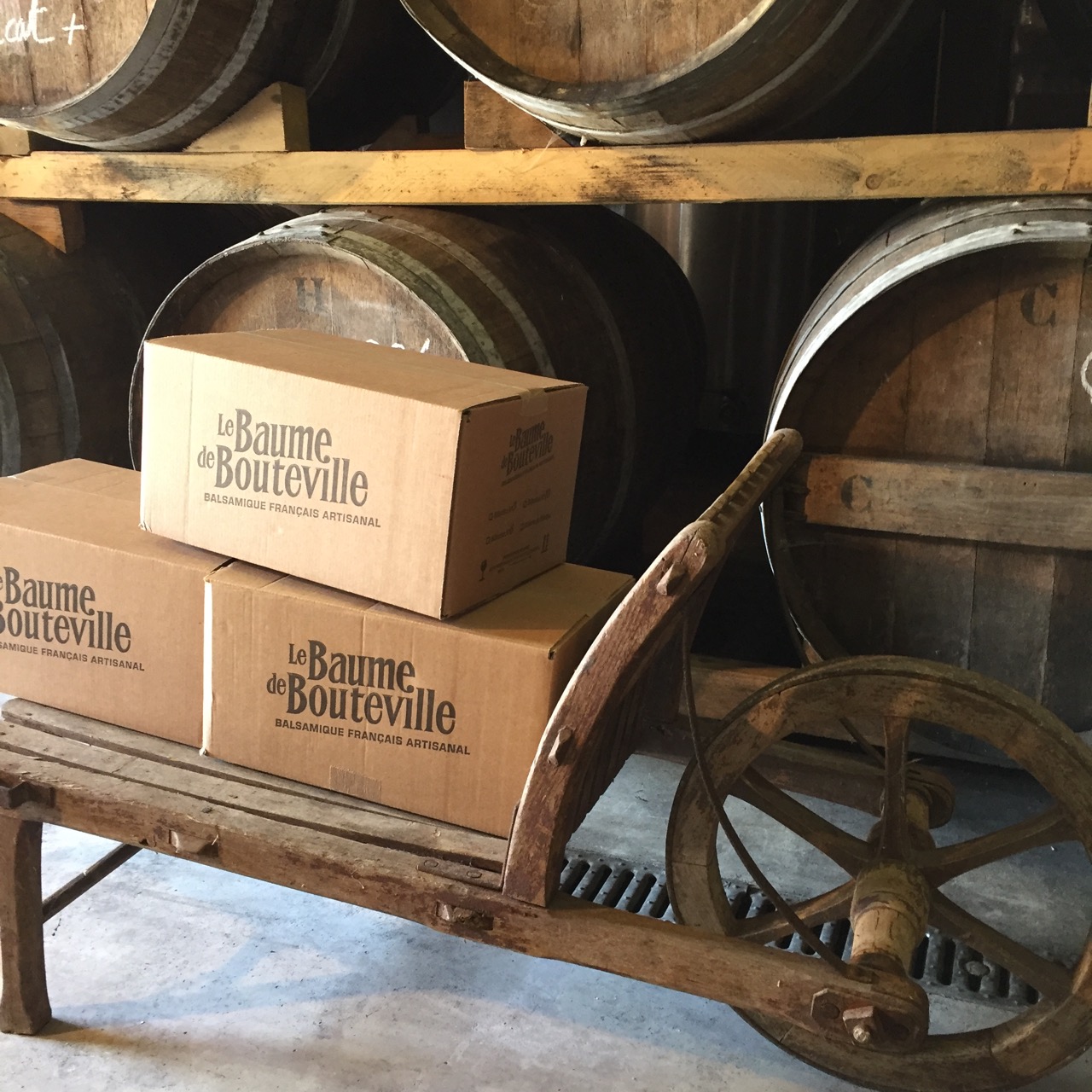 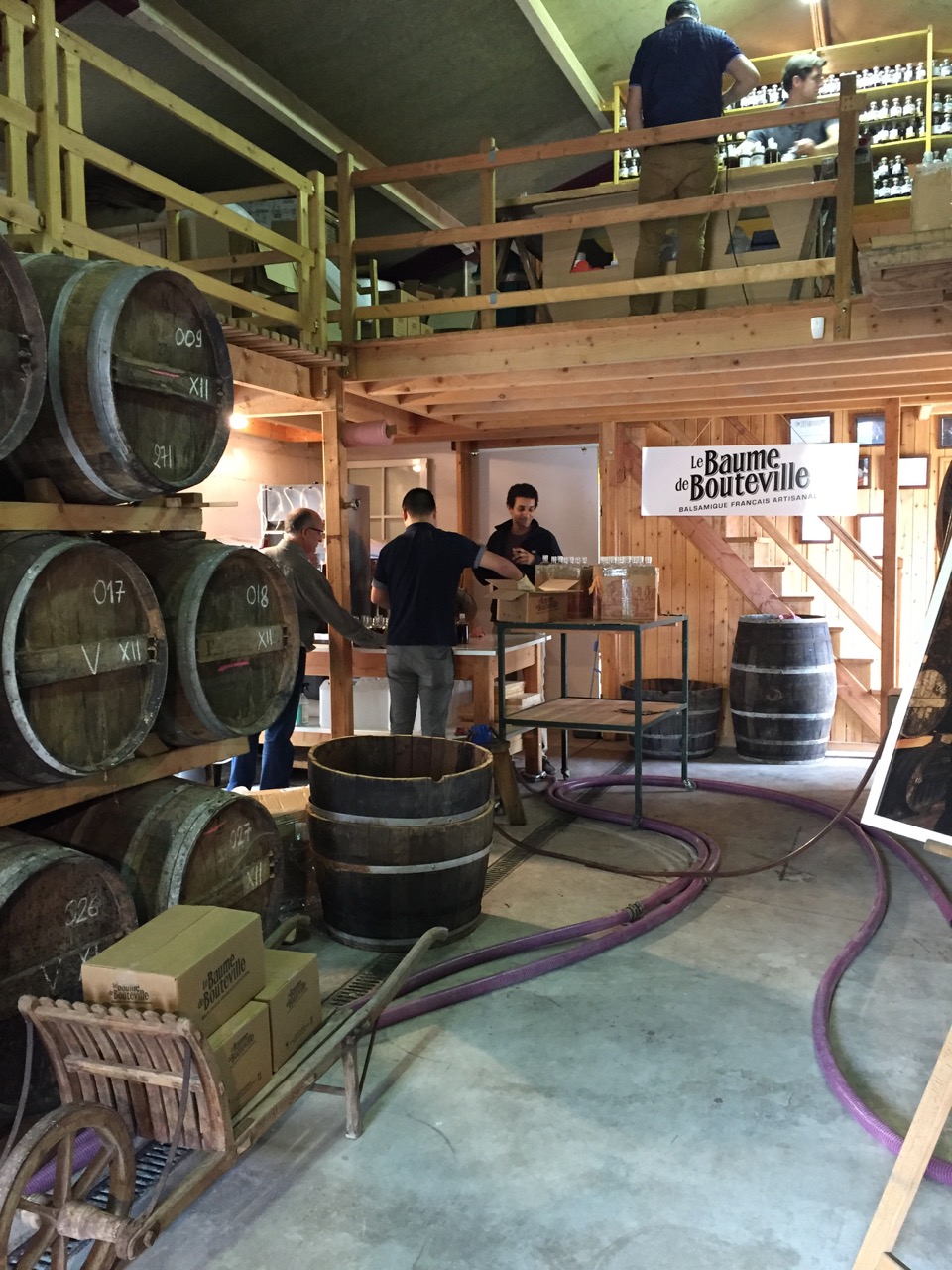 And it really is an artisan company – the business has got so much going for it that makes it a ‘craft’ business. Everything – and I mean everything – is carried out at the property. From the production, aging, the bottling to the labeling, everything is done by hand and carried out through natural production. Small batches, not mass production, is the name of the game for Baume de Bouteville. Once again I see the similarity to the small, artisan cognac houses.

Of course, I had to try the balsamique. And it honestly is something special. I enjoyed it with oysters, and with various salads, with cheese, with salad again. 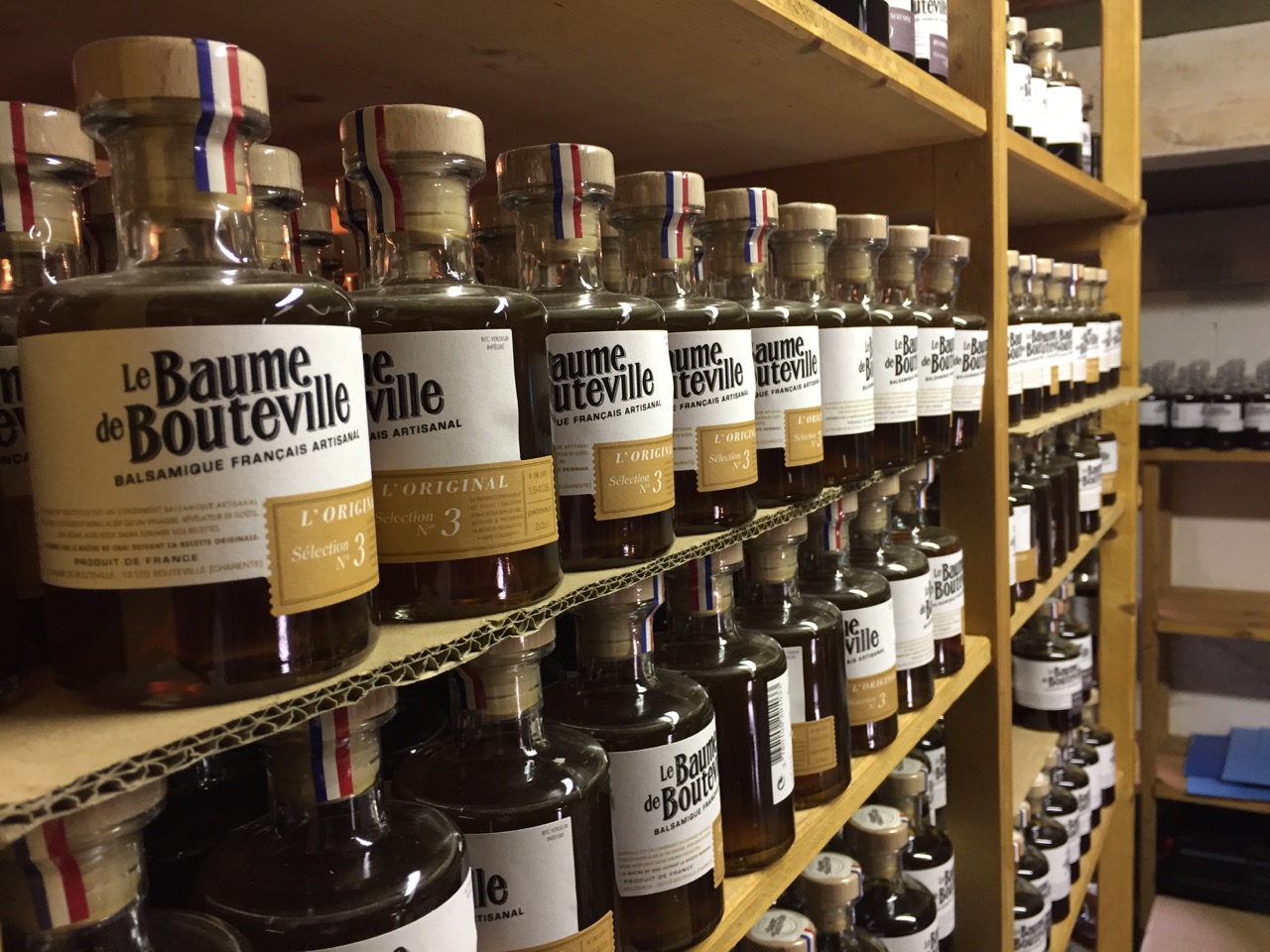 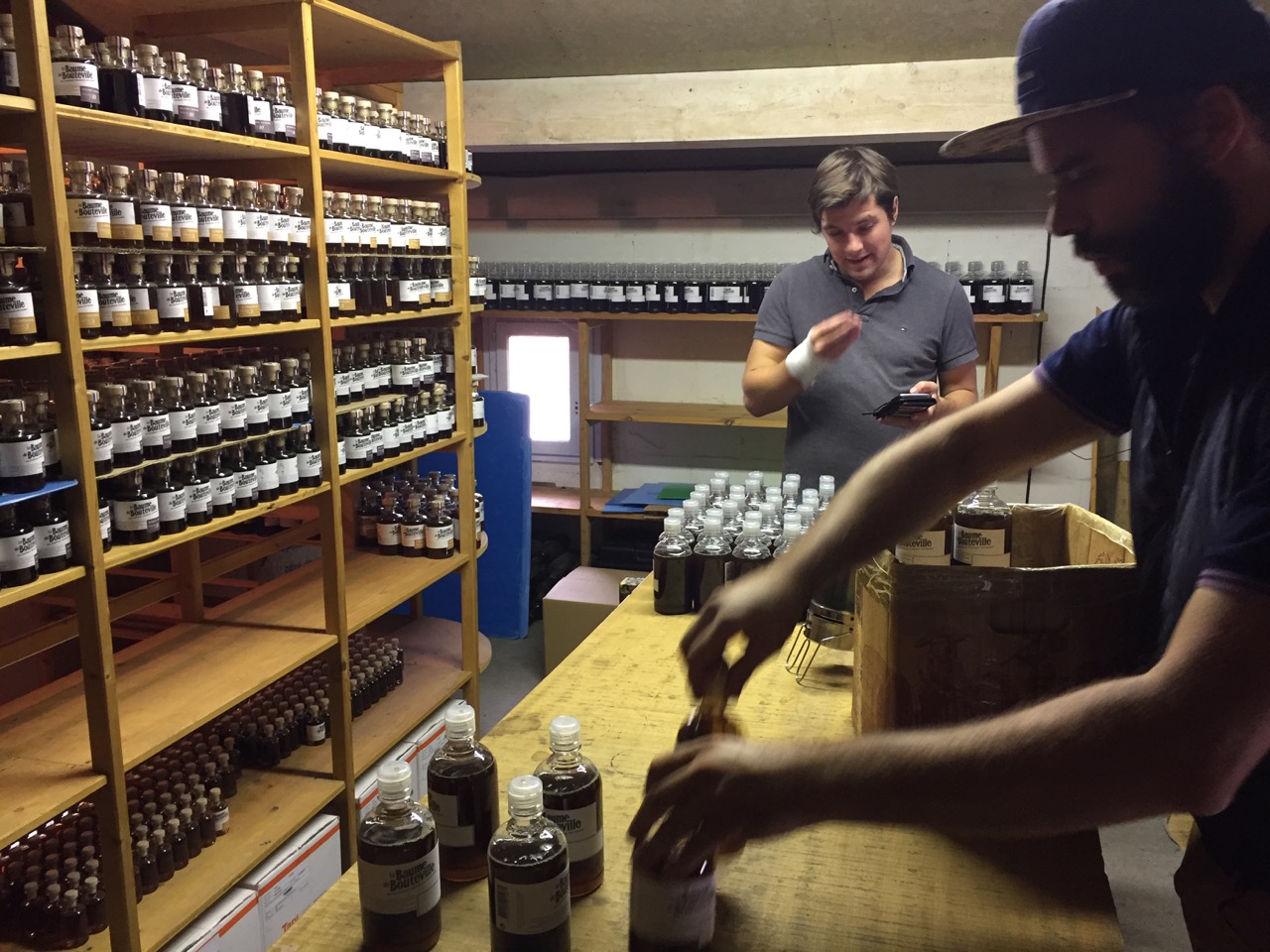 And as with Cognac, this exclusive vinegar has tasting notes. For the La Vielle Reserve ‘Selection No 6’, expect a perfect balance between fruity notes of citrus and peach, coming from the grapes, and hints of walnut and chestnut from the aging process. It’s suggested that it can be used as a meat glaze (their favourite is duck breast!), to embellish soups and risotto, or to marinate scallops.

For the La Reserve Exclusive ‘Selection No 10’, expect natural flavors of red berries, prunes, and hide. It’s great with beef carpaccio, lobster, or even as an addition to a dessert, such as strawberries. 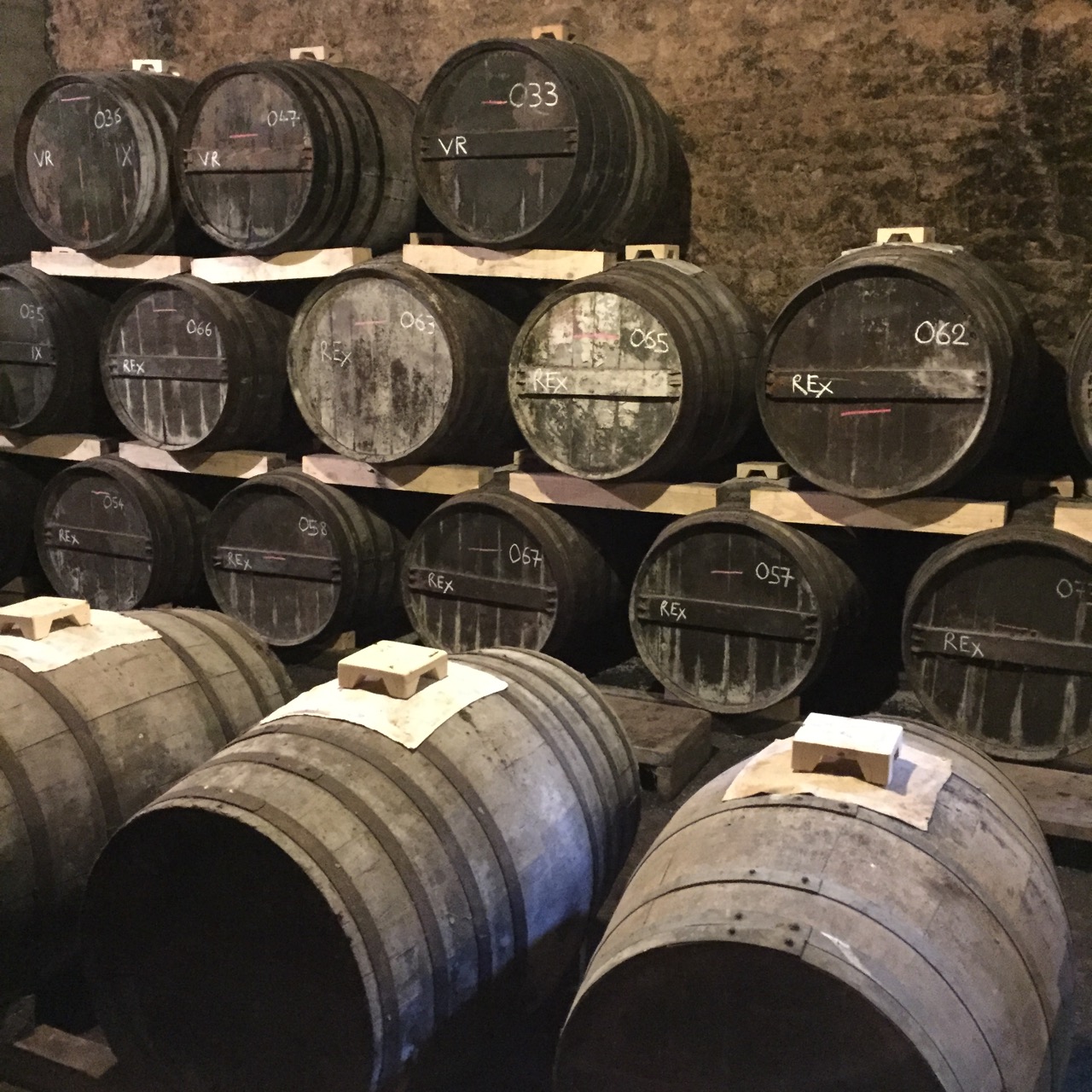 Again, even the tasting notes are similar to cognac. And because these flavors develop naturally from the grapes and the aging process, the climate, weather, and soil can create slight variations in taste over the years.

It’s no wonder that they supply some of the best haute cuisine restaurants in France. I doubt it’ll be long before other countries come knocking to import too.

I love the product and wish the guys all the best with the business. And if you fancy trying some hand crafted French balsamic vinegar, here’s the link to their website where you can purchase and see for yourself.

It’d make a great set for Christmas or the New Year. 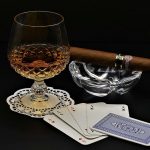 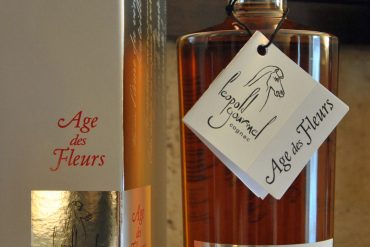