Armenian Brandy – Returning from the Brink

ARKA news agency interviewed the executive director of the Armenian Yerevan Brandy Company, Ara Grigoryan, to find out how the company is coping after its devastating crash in trading in the last fiscal year.

When questioned about the current trading levels after last year’s crisis, Grigoryan was happy to say that thankfully the crisis for the company has now abated somewhat.  However, despite sales improving, they are yet to return to the pre-crisis levels and seem unlikely to do so until they recover their losses in the Russian market.

But even the darkest cloud has a silver lining and despite a 35% decline in sales, the company still managed to maintain its market share and even increased the position of its ArArAt brandies.  The company has also started to diversify in terms of its geographical exports.

Grigoryan stated that they have had trial sales in Italy, Vietnam and Uzbekistan, with Italy providing them with small repeat orders.  They are setting their sights on the Asian market as well, although are finding difficulties in breaking in due to these markets being focused on Cognac and other French products.  However, intense work with the relevant authorities leaves Grigoryan hopeful that this endeavour will, at some point soon, come to fruition.

He also spoke about the newly formed Union of Armenian Brandy Producers.  Consisting so far of 12 companies, he feels it’s an important step for Armenia to be taken seriously as a brandy producer by other countries of the world.  He hopes that the union is a step towards talking openly about the problems of fakes which are the bane of the genuine producers and also may go some way towards fighting the booming trade of counterfeit brandies.

Grigoryan also hinted at a future advertising campaign which will build on the association of Armenian brandy with the British Prime Minister, Winston Churchill.  He refused to be drawn on the subject so we shall just have to wait and see…. 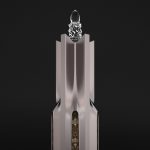