Cognac advertisements and labels have always been rather eccentric and creative, featuring all sorts of characters, stories, and situations to promote the eaux-de-vie. We suspect it probably has something to do with the consumption of the liquor prior to the brainstorming session.

We thought we would take a closer look at some of the early Cognac posters, delving into the story behind the adverts, the artists who created them, and the brands they promote. 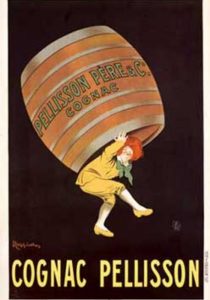 This Cognac Pellison cognac ads and posters are an advertisement from 1907 that was designed by innovative poster artist, Leonetto Cappiello.

Leonetto Cappiello was an Italian artist who spent much of his life in Paris and came to be known as the Father of the Modern Advertising Poster. Surprisingly, Cappiello had no formal art training, however, he quickly excelled in his craft and emerged as one of the leading Italian artists and caricaturists in Paris.

Cappiello’s success eventually led to him succeeding famous lithographers such as Henri Toulouse-Lautrec, Jules Cheret, and Alphonse Mucha to become the leading advertising poster designer in the French city.

Cappiello is credited as having revolutionized the traditional style of poster illustration, his approach was a simple but effective one. In the increasingly fast-moving city of Paris, Cappiello recognized that the way to draw people’s attention was to present them with unconventional visuals that made an impact.

As is demonstrated with this Cognac Pellison poster design, Leonetto often used bold and enlarged subjects in vibrant colors, contrasted against a dark background so as to make the art ‘pop out’. This graphic style proved to be highly effective, not only in engaging the attention of an audience with a product but also in building a brand.

The Cognac Pellison poster is a whimsical design, typical of Cappiello, featuring an oversized barrel of Cognac being carried by a struggling and brightly dressed character. Cappiello has used a warm shade of yellow on the poster to remind the audience of the warmth of Cognac.

Pellison Pere & Company was established in 1836 and was handed down through the family’s generations up until 1973 when they made the decision to sell the business to Hennessy. However, despite the sale, Cappiello’s magnificent barrel-carrying character survived the change of hands and remained the product’s logo up until the dissolution of the brand in 2009. 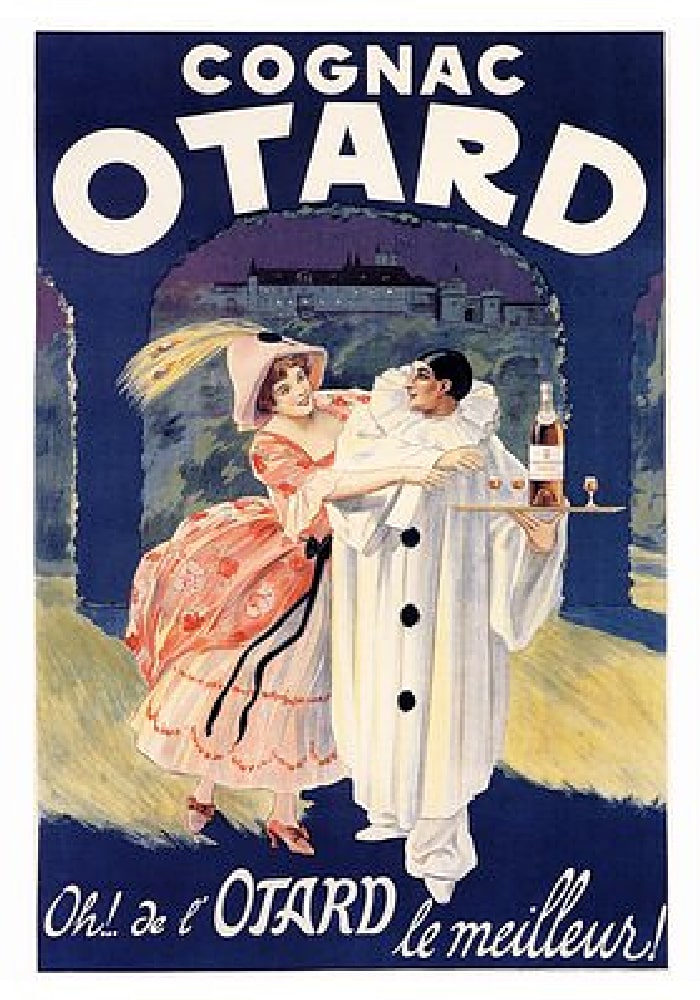 Cognac Otard makes use of the popular European story and characters of Pierrot and Columbine to promote its Cognac in this poster from 1922.

Pierrot is a pantomime character who originates from a late 17th-century Italian troupe of entertainers who would perform in Paris, known as the Comédie-Italienne. Pierrot’s character typically chases and pines for the affection of Columbine who usually breaks his heart and leaves him for Harlequin.

However, in this advertisement, Pierrot finally manages to capture the heart and attention of Columbine with the help of Cognac Otard, because as the text at the bottom reads “Oh! Otard is the best!” The poster is painted to appear as though the moonlight is illuminating the charming couple and it also allows us to see the impressive Chateau de Cognac in the background, where Otard Cognac is produced.

Cognac Otard was founded in 1795 by Baron Jean-Baptiste Otard and is still in production today. The Otard family’s heritage can be traced back to a notorious Norweigan Viking warrior called Ottar and the family spent centuries in Scotland before relocating to France after the Glorious Revolution in 1688.

After fighting alongside Louis XIV, they entered into French royalty and were given Chateau de Cognac as their estate, the deep cellars of which are used for aging Cognac Otard. 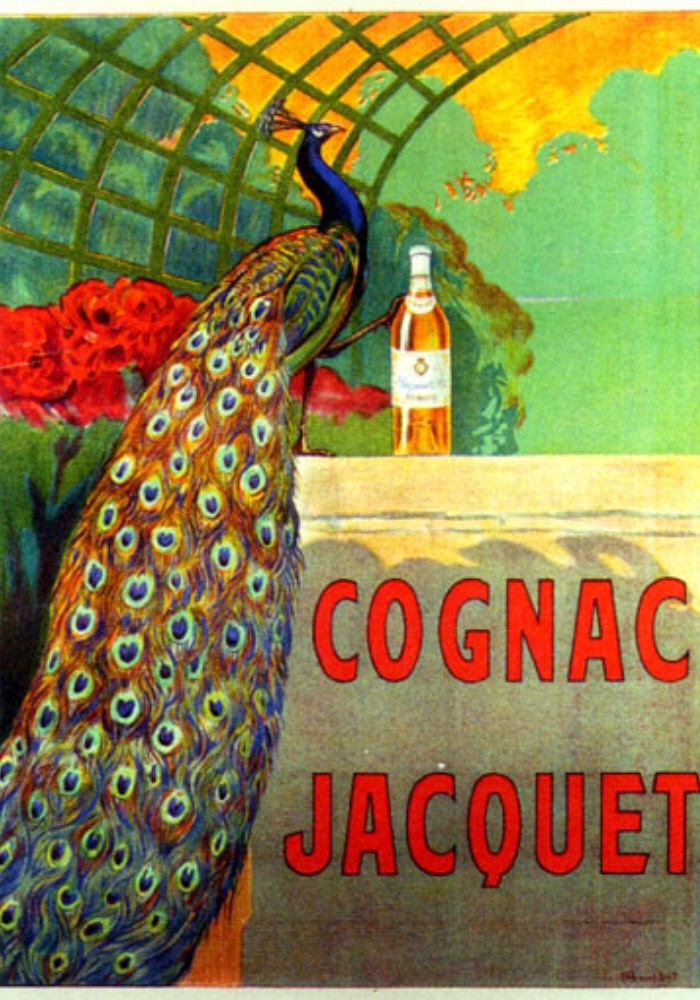 This stunning art-nouveau poster was designed for Cognac Jacquet by Camille Bouchet in 1906. The rich and vivid advertisement features a regal peacock, gently resting its talon on a bottle of the brand’s unopened Cognac.

The vibrant poster soon became so popular and synonymous with the brand itself, that Cognac Jacquet made the decision to replace its outdated white label with that of the majestic peacock. This move made the poster a victim of its own success, as advertisers now viewed it as obsolete, due to it featuring the old product labeling.

Not much is known about Cognac Jacquet today, however, a number of the posters that had been stored away by the family, due to no longer being of use, emerged on the market in 2005. 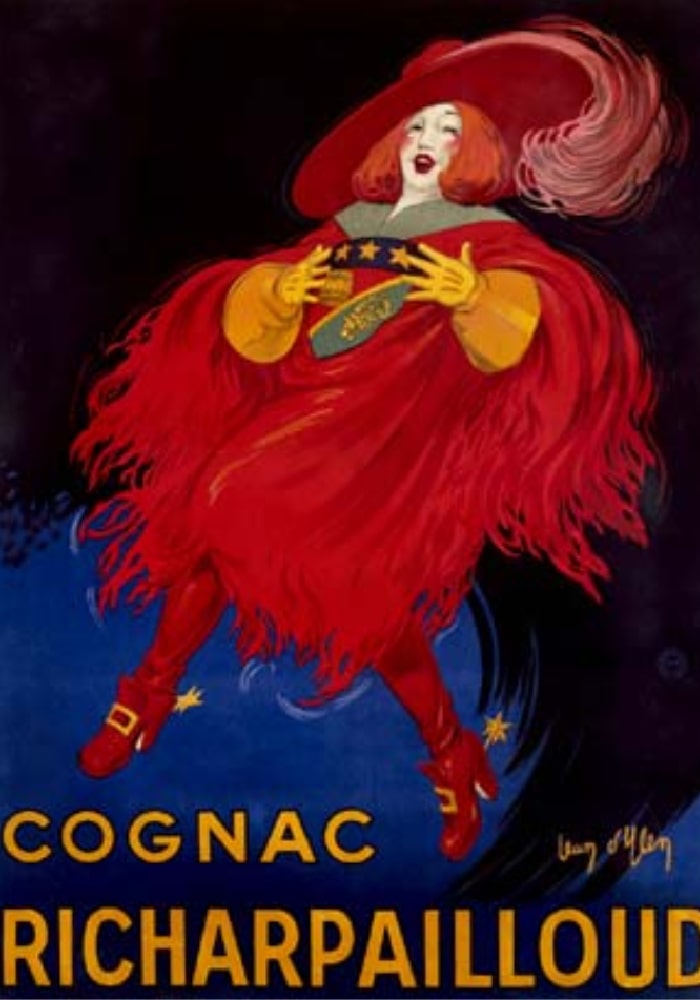 This eye-catching poster came slightly later than those mentioned previously, it was designed in the early 1930’s by Jean D’Ylen for Cognac Richarpailloud.

Jean D’Ylen, whose real name was Jean Paul Beguin, took significant influence from Leonetto Cappiello in his designs. This is evident in the dark background of his poster and the oversized, dynamic character who seems almost suspended in the air.

The artist started his career as a jewelry designer, before transitioning into advertisement illustration with the publishing company Vercasson Paris. Cappiello also worked for the same publisher and so it was not until Cappiello left the company in 1916 that D’Ylen got his opportunity for the limelight and rose to prominence.

D’Ylen specialized in creating striking artwork in bold, primary colors and combining this with humorous messages, leading his works to become some of the most sought-after posters printed in the 1920s and ’30s. 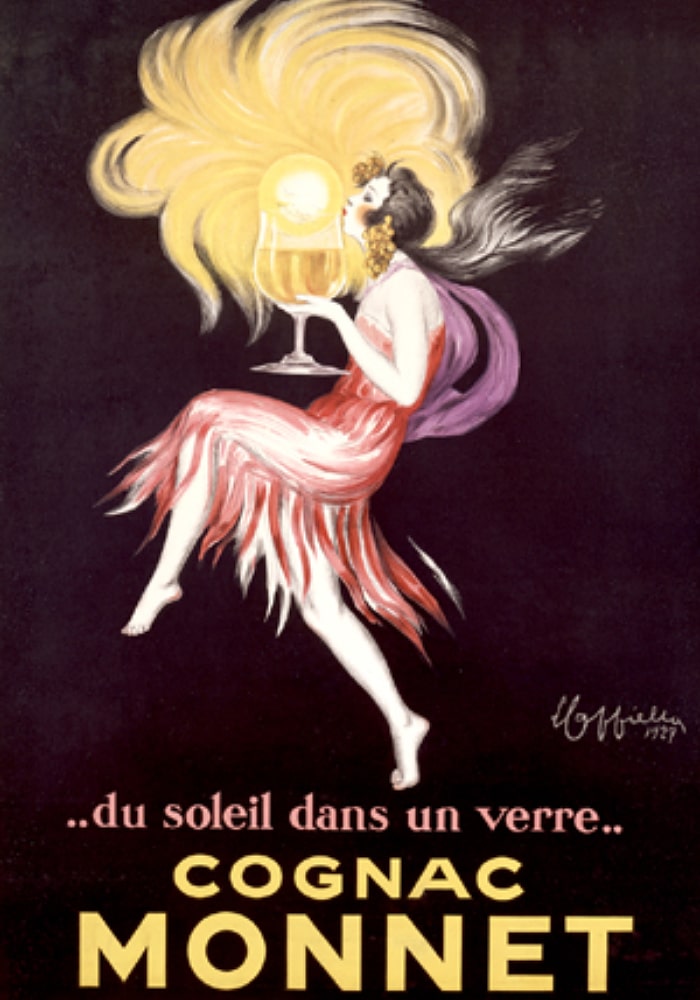 Another poster on our list by the famous Leonetto Cappiello here and this time for Cognac Monnet.

This advertisement depicts a flapper girl wearing a red dress, dancing and kissing a huge glass of Cognac Monnet. The sunshine that is radiating from her glass and the phrase below which reads, “a sun in the glass” is intended to remind the audience of how Cognac warms you when you drink it.

Cognac Monnet was founded in 1838 by Jean Cognac, who is the founding father of the European Union. The Cognac house became rapidly well-known due to this early advertising poster by Cappiello and the company is still in business today. 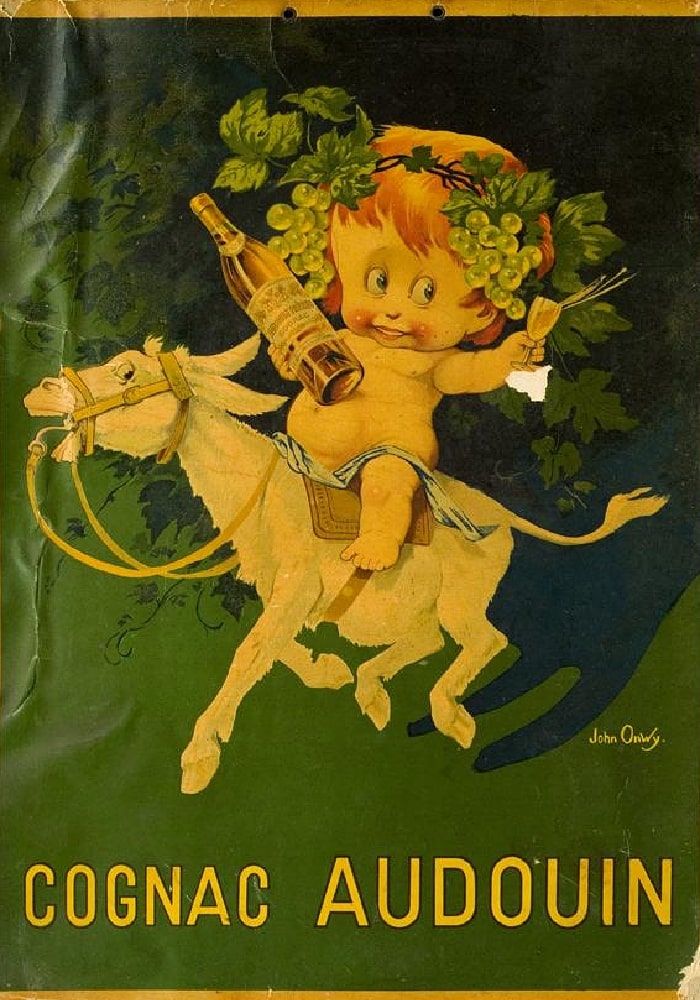 Although there is limited information available regarding this poster, we simply couldn’t not include it due to its amusing design.

The poster was created by John Onwy, a French 20th-century artist, for Cognac Audouin. John also created advertisements for an array of different brands, with his works always featuring mischievous children interacting, often comically, with the product in some way. In this poster, a drunken child clings to a bottle of Audouin Cognac in one hand, with a full glass in the other, whilst riding what appears to be a rather distressed donkey! 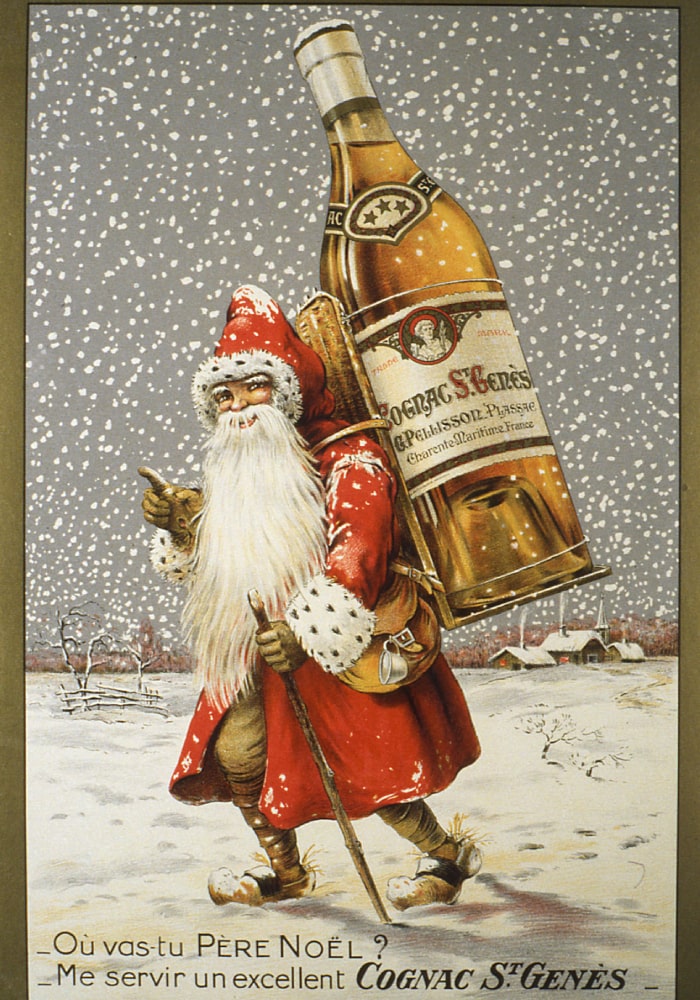 This festive advert shows us Father Christmas trekking through the snow with a ginormous bottle of St Genes Cognac strapped to his back.

The text underneath in French reads “Where are you going Santa Claus? To pour me an excellent St Genes Cognac”. 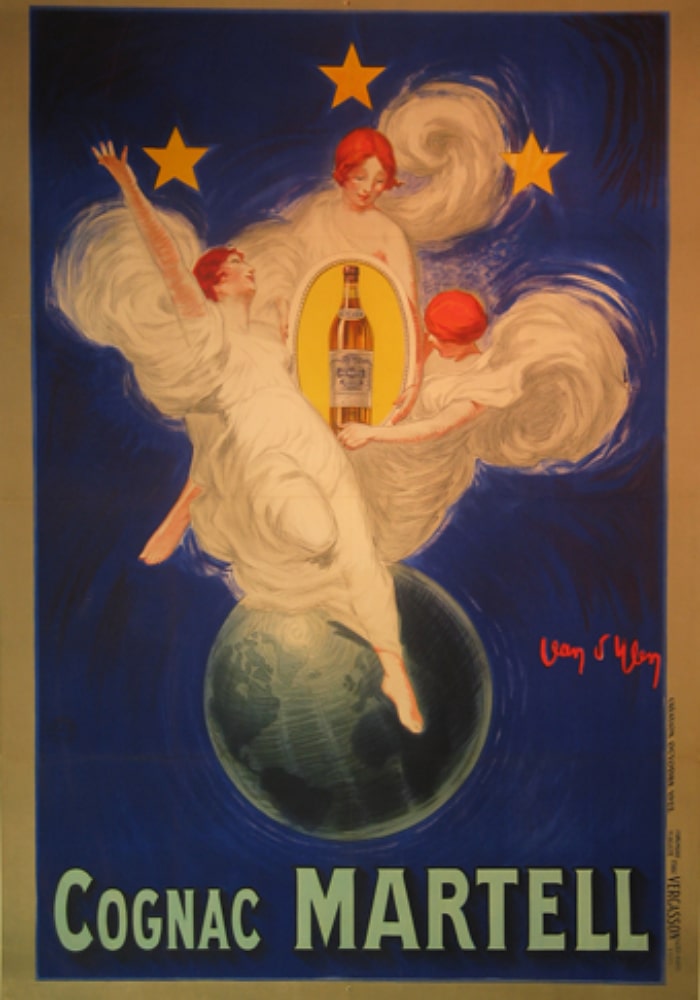 Another poster here from Jean D’Ylen, this time for Martell and designed in 1922.

The advertisement depicts three angels floating above the earth, cradling a bottle of Martell Cognac and the artist has employed his signature style of primary colors for the piece.

So there you have it, an eclectic mix of unusual and humorous Cognac adverts from the early 1900s. If you have any favorite vintage Cognac posters that we haven’t mentioned then get in touch and tell us more about it, we always love exploring the history of liquid gold. 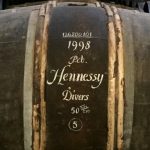 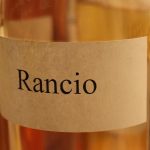 All about Rancio: The mysterious Cognac phenomenon